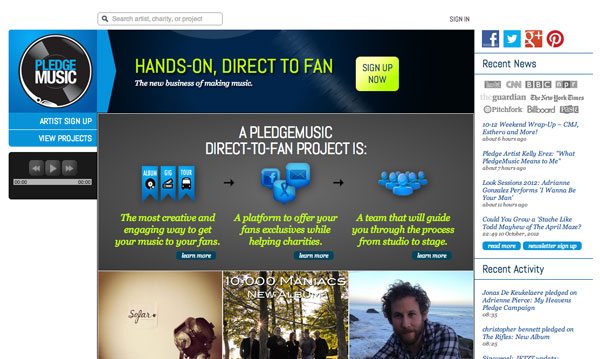 Brooklyn-based guitarist, vocalist and songwriter Sonia Montez failed her first time around at a crowd-funding attempt. Her Kickstarter campaign only funded 25 percent and she had to walk away with no money at all.

“It was rushed. I was kind of pushed into it. And I had a bad feeling from the beginning,” she says. “It was heart breaking.”

But now, as she steels herself to give it another go, Montez has a plan.

“This time, I’m using PledgeMusic.com as the campaign host. They’ve helped me set realistic goals. I’ve got my lists and network all ready to go, and I’ve pre-arranged with people in my network to get my message pushed out by them. Plus some of the funds raised are going to support the charity DVDs for Troops, so I feel extra good about it.”

Montez is not alone. The crowd-funding phenomenon seems to be the future of arts financing.