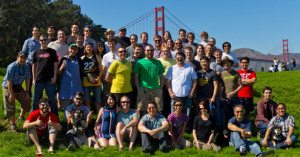 It’s difficult to recall a time before Kickstarter’s game industry prominence, but just twelve short months ago the crowdfunding website had a considerably lower profile. Given the empowerment it has brought to developers, then, it’s ironic that the website kicked off 2012 at the centre of controversy as it became the source of a report that Atari was threatening legal action against developers it felt had infringed on its IP rights.

But it was Double Fine’s campaign for a point-and-click adventure helmed by Full Throttle and Grim Fandango creator Tim Schafer that truly catapulted Kickstarter into the public consciousness. As we all know now, Double Fine Adventure flew past its goal of $400,000 to raise $3.3 million, opening the floodgates for more high-profile games to follow and causing many to question the continued relevance of traditional publishers.