It wasn’t the most auspicious start to a crowdfunding campaign. Two hours before the Kickstarter page had even gone up, rumours of Total Annihilation and Dungeon Siege designer Chris Taylor’s new game, Wildman, had surfaced on news sites. The game, a brave hybrid of RPG, RTS, hack-and-slash and MOBA is aiming for a modest budget of $1.1 million, meaning it’ll need around $35,000 a day to make its target.

As we spoke to him moments after the leak, Taylor, who had been preparing for the launch for weeks, was obviously exhausted (“My 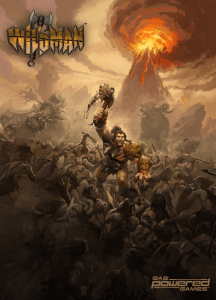 nerves are a little scatterbrained because of all the prep work… I’m a little nutty right now”) but still keen to play down the ostensible similarities between Wildman and a MOBA like Dota 2 or League Of Legends. “We know that there’s bandwagon-hopping for MOBA. We’re not doing that, we’ve got an action-RPG here, but if you’re like me, then action-RPG is getting a little long in the tooth, you know?”