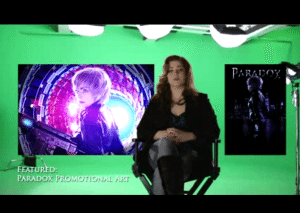 Contributions through the crowdfunding campaign will be serving double duty: not only will they support the Paradox development budget, they will also support two important charities.

Award-winning director Elana A. Mugdan and accomplished film producer Dave Brown are gearing up for an ambitious independent film project this year: a $5 million science-fiction drama entitled Paradox.  The development budget for Paradox comes in at under $23,000. Mugdan and Brown have launched a crowdfunding campaign on Indiegogo to raise that much money or more in the next 30 days. They plan to focus on reaching investors and fellow artists in the film community in order to meet their goal.

In addition to acquiring an equity position in the film, investors can choose from a number of rewards, detailed on the IndieGoGo campaign page. Those rewards are designed to be particularly attractive for investors at the higher end of the range. They include film credit as Producer or Executive Producer, spending a day on set with the cast and crew, and a VIP all-access invitation to the world premiere of Paradox.

Paradox tells the story of Sophie and Caleb, two scientists who are drawn into an impossible mission when a time traveler from the future returns to the past…in order to prevent the invention of time travel itself. Set in both the near and far future, the film is the first in the genre to embrace the paradoxes inherent in the concept of time travel, rather than to have them hinder the story as plot holes. Paradox blends exciting action, thought-provoking science theory, and an unconventional love story.

Shooting is planned for late summer and early fall of 2013, on location in and around New York City.

Mugdan and Brown are well on their way to making this movie a reality. They already have an agent to negotiate sale of the rights in foreign territories; they have a number of equity investors lined up; and New York State film incentives will provide a significant fraction of their total budget. Their next step is to raise funds for pre-production and development, including hiring a casting director in LA to bring in name talent and creation of investor packages.

“Achieving our goals for development funding will put us in a really good place,” said Mugdan. “From there, we know we’ll be able to take the steps that will attract equity investors and secure the rest of our production budget. This movie will get made.” Mugdan has a proven track record of producing quality films on time and under budget. She has produced numerous trailers, web series and short films, including one with over a million views on YouTube. Her first feature film, produced in 2010, was accepted to 14 film festivals world-wide, won awards at four of them, and has since received distribution and has been released to the public.

While Mugdan will take the creative lead, Brown will manage the business end of the Paradox project. He has spent the last six years working in production, and has been privileged to collaborate with two Academy Award winning producers.

Mugdan and Brown are donating 5% of net proceeds from their IndieGoGo campaign to the Hurricane Sandy Relief Foundation, and an additional 5% to the ASPCA. “Producing the film at home in New York will serve to stimulate the local economy,” said Brown. “But it’s also vitally important that we be able to give back what we can to help rebuild our community.” Mugdan added, “the hurricane was devastating not only for people, but for animals as well. We aim to help both … and that’s not a paradox.”