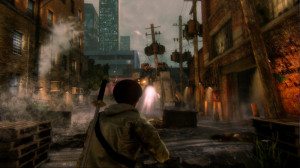 Project Awakened gives each player the opportunity to wholly define their dream video game character and put them into immersive action-packed environments which then respond to each person’s personal gameplay style and character creation.

Originally conceived at Midway Games as an ambitious next gen game called “Hero,” Project Awakened, powered by the Unreal Engine 4, and its core gameplay tenets were saved by a group of its most talented developers who then started Phosphor Games Studio.

Perhaps the most exceptional thing about Project Awakened is the potential to craft gameplay experiences and challenges that never existed before:

The possibilities are endless and allow each player to generate one-of-a-kind gameplay experience unlike anything before.