Wildman by Gas Powered Games having set a high target of $1 Million goal pulled the plug on their Kickstarter campaign when it became clear their crowdfunding campaign was going to fall far short of their objective:

We have some news today. We are canceling the Wildman Kickstarter.

At this point, it makes sense for us to focus our attention on other ways to keep Gas Powered Games running. Unfortunately, we are unable to share any specifics in public. When we have news to share, we will be posting it on our site. If you want status updates, or if you want to continue discussing Wildman and/or this Kickstarter, please consider migrating over to forums.gaspowered.com.

We are profoundly grateful to those of you who backed this project and Gas Powered Games. Your passion and hard work put us in a position to write this exciting new chapter in the history of GPG. 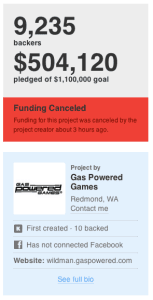 amount.  Founded by Chris Henderson, a well known game developer, Henderson had foreshadowed the failed effort last month when he was forced to lay off a significant number of employers from the company.

Backer comments on Kickstarter were overall very understanding regarding the decision to kill the effort.  It was not certain what steps the Redmond based Gas Powered were leaning towards going forward.

The latest cancellation follows other recent failed crowdfunding attempts from the gaming category.