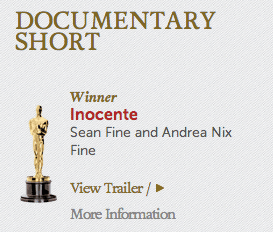 The movie Argo may have picked up the biggest prize in last week’s Academy Awards ceremony, but it was the Best Documentary Short winner that had many on the Internet buzzing. Inocente, a film about a 15-year-old homeless girl who dreams of becoming an artist, took home the Oscar and in the process became the first Internet crowdsource funded film to win Hollywood’s biggest award. Last year, the film raised $52,527 on Kickstarter, a crowdsource funding website that has raised over $100 million (U.S.) to support the creation of independent films.

The emergence of crowdsource funding – or crowdfunding – points to the power of the Internet as an important source of financial support for independent creators, whether film makers, musicians, software programmers, or authors. Crowdfunding enables creators to raise funds through small contributions from the public by publicizing their project using the Internet and social media sites. Crowdfunding success stories encompass new products, companies, and community initiatives, but movies have fared particularly well.

Kickstarter is the best-known crowdfunding site, having raised huge sums of money and seen the films funded by its community enjoy commercial and creative success.