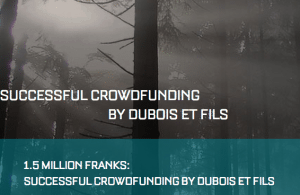 Swiss watch manufacturing company Dubois et fils has announced a successful self crowdfunding effort in the amount of CHF 1,500,000 (approximately $1,589,490).  The “Crazy and Very Exciting” crowdfunding campaign was launched in the fall of last year.  The crowdfunding was for equity ownership in the Swiss company based in Le Locle Switzerland near the French border.

Dubois et fils launched the crowdfunding campaign without the assistance of any crowdfunding portal or outside vendor.  They appealed directly to watch enthusiasts and customers to become owners in one of the oldest swiss watch manufacturers in the country.

Over 220 individuals invested in the offering from 19 different countries.  In a statement on their site, Dubois et Fils claimed demand was so robust some investors had to be turned away.   Various package levels were offered for equity participation which also included an element of the rewards based offering made popular in the United States by Kickstarter and Indiegogo.  Shareholders could receive preferred access to newly released watches along with significant discounts off of retail pricing.  US based investors were excluded from the offering due to regulatory issues.

The DuBois family started producing watches in 1751. Philippe Dubois et Fils was founded in 1785 in

Dubois et Fils will use the funds to reposition their product with new, exclusive, limited edition watches of less than 100 pieces per model.  Their target market is a highly successful, sophisticated individual that appreciates tradition and very high quality.