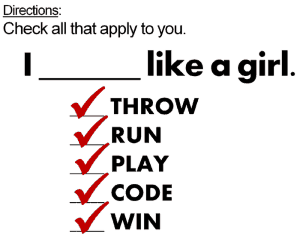 popular Facebook page “I F*cking Love Science,” the Internet redeemed itself somewhat after throwing its collective support behind a Kickstarter campaign that’ll help a 9-year-old girl build her very own role-playing game.

With the help of her mother Susan, Mackenzie Wilson—she goes by Kenzie— turned to the popular crowdfunding site to raise $829, enough money to cover her entrance fee to RPG STEM Camp, a program where kids learn the necessary skills to build their own video games.