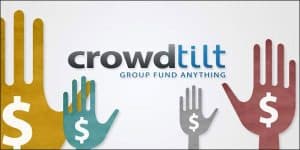 Subscribers to the showbiz news website Popbitch this week learnt more than the usual celebrity gossip. Alongside the truth behind those stories about Chris Huhne’s Twix bars in Wandsworth Prison were details of Popbitch’s plans to raise expansion money through a crowdfunding effort run by Kickstarter.

That’s nothing new in the media world. Kickstarter has raised $500m for creative projects like this since launching in 2009. People with ideas for movie productions, theatre shows or fashion designs use the site in their thousands in search of investors to move their dreams from drawing board to reality.

Essentially, investors view a beauty parade of project ideas to which they can donate in exchange for some kind of a return. In Popbitch’s case, you get a load of free content, tickets to parties and other goodies.

But Silicon Valley is abuzz this weekend with news from a younger crowdfunding website: Crowdtilt. It only launched last year, and is basically like Kickstarter – but for absolutely any kind of cause or project.

Read More at The Independent