WE ARE THE EXPLORERS: A movie trailer for our space program

Crowdfunding for NASA – in a round about way.  Unknown to most people, NASA is barred from purchasing advertising.  Recently a campaign on Indiegogo was launched to purchase a trailer to run prior to the next Star Trek film which will soon be in theaters across the country.  As quoted from the campaign;

When the Space Shuttle landed for the last time, many Americans thought NASA was closed for good.  Nothing could be further from the truth. Right now, men and women from the space program are designing and building next generation space vehicles to go to new destinations in space, farther than we’ve ever gone before. 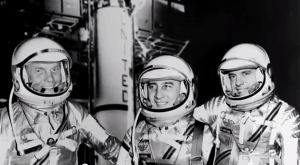 of Optimus Prime (see above), to show the progress being made on these new systems, but the agency is barred by law from buying advertising time for such a spot.

Today we’re running a crowdfunding campaign to edit this video into a 30 second spot, and place it in movie theater screens around the country, starting with the premiere of ‘Star Trek Into Darkness.’

By backing this 30 second trailer in the top movie theater markets around the United States, you can show our students and young people that we’re in an exciting new era of space exploration. Now is the time to reach them – to remind them that an inspiring space program awaits, one that is worthy of their ambition.

Well they hit their goal and then some.  The crowdfunding campaigns original target was for $33,000 and as of a recent review – the amount raised had surpassed $43,000.  Now the campaign is on a stretch funding drive to reach $94,000.  If the stretch goal is hit the trailer will be viewed in over 750 screens across the country.  I am looking forward to seeing this on the big screen.