Above is the video from today’s session at the Milken Institute entitled; Crowdfunding: Decentralizing, Disintermediating, Disrupting.

A brief description is below:

The concept of crowdfunding, seen as the next phase in the democratization of finance, has captured the attention of 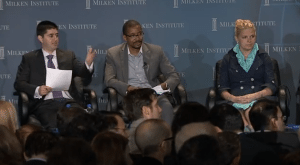 investors, entrepreneurs, technologists and the media. It can be defined as a means of raising capital for a project or enterprise through the pooling of numerous, small contributions or investments from the public, usually via the Internet. Last year, entrepreneurs around the world raised an estimated $2.8 billion through crowdfunding. The bipartisan Jumpstart Our Business Startups(JOBS) Act, passed in the U.S. in 2012, seeks to open the market for securities crowdfunding, enabling average investors to purchase debt and equity in enterprises ranging from startup companies and mom and pop shops to real estate. Additionally, the law lifts the ban on general solicitation, allowing companies to mass market securities to accredited investors, which could spur a sea change in capital raising. Join us for a discussion about maximizing the promise of crowdfunding while minimizing risks to investors and entrepreneurs.