Last year a student at Chardon High School in Ohio shot and killed three classmates and wounded three others, leaving one permanently paralyzed.

Fast forward to today and the city of Chardon is again in shock, this time due to the dispersement of over $900,000 allegedly raised by the United Way of Greater Cleveland and the United Way of Geauga County. Families of the victims have filed a lawsuit claiming that of the $952,000 raised by these local charities, less than $150,000 has actually been dispersed.

The victim’s families are claiming that while dispersement of the funds has been slow, the families have been left to suffer undue hardship while dealing with the aftermath of an already tragic event. One is left to wonder whether a more direct means of charity would have been more appropriate in these circumstances, perhaps via a crowdfunding campaign.

Regardless of the legitimacy and outcome of this particular case, it highlights a larger concern that has played out over the years among the United States’s vast network of over 6,000 nonprofits and charities. Some seem to be more effective than others.

CharityNavigator.org maintains rankings for the nation’s nonprofits based on publicly available tax documents. As an example, the worst charity they have on record is the rather benignly named National Veterans Services Fund, who in 2011 raised over $11 million. Only $2.3 million went toward programs the charity exists to execute. Over $8 million was spent actually raising funds.

Problems with efficiency play out all over the nonprofit landscape. A specific gripe for CharityNavigator is executive pay…

In recent years, Charity Navigator has become outspoken against what it calls high CEO compensation. At the same time, they note that nonprofit CEO’s should be paid what the market demands. They complete a CEO compensation study each year. In the study they have consistently argued that a low six figure salary for a CEO of a mid-to-large sized nonprofit is the norm and should be acceptable to donors. They further argue that these are complex multi-million dollar operations that require a high level of expertise. They are however, outspoken against the phenomena of million dollar plus compensation, which they do not believe is justified for a tax exempt public charity.

Crowdfunding has come on the scene as an emerging tool in the wake of disasters and for other charitable causes with a longer tail. Take CNN Money’s recent article on crowdfunding platforms raising money for victims of the Oklahoma tornadoes as an example. Fundly has been a leader in raising funds for victims, particularly via a crowdfunding campaign supported by Mercury One. Mercury One is a 501(c)3 supported heavily by Glenn Beck. (Glenn’s wife Tania sits on Mercury One’s board)

HopeMob has a similar initiative running in partnership with Convoy of Hope, a highly rated charity that allocates over 80% of funds directly to supported programs. CharityNavigator gives this charity their highest rating, four stars.

Often times funds donated through crowdfunding platforms can circumvent charities entirely and go directly from donor to receiver with only a single intermediary (the project creator) in the way. If you’re lucky you can even watch the money being delivered. Of course, this comes at the expense of favorable tax implications for those donating. There is also a serious and legitimate concern about accountability in regards to campaigns like these. Often times the donor is relying on the good faith of the project creator, a lofty ask when said creator is a total stranger. 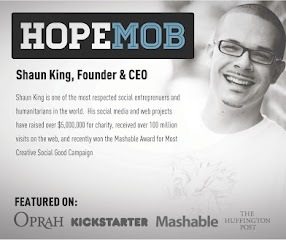 However, the gain is expediency. Time is often of the essence in troubling situations. There is also the benefit of being able to handle needs on a case-by-case basis, ensuring transparency in where funds are going. Rather than blindly donating $10 to a fund and walking away, donors may find solace in knowing that their money went to rebuilding a family’s roof or paying for funeral expenses.

Crowdfunding platforms should consider ways to be more transparent in regards to use of funds for charitable campaigns. Integrating ratings from charity watchdog agencies may help educate donors on what to look for in a charity rather than donating money purely on the merits of the cause. The fact is that all charities are not created equally.

See how Google One Today approaches transparency in crowdfunding for charity

By the same token, donors should educate themselves on the merits of the charities they support and consider alternatives, especially those that may funnel more dollars to the specific causes and projects they exist to fund. Smaller charities, for example, often exist with lower overhead and therefore are able to funnel more funds directly to causes. Crowdfunding is a great way for these charities to raise funds in a way that is easy for the donor and that leverages the stunning power of social media.