Gawker’s “Crackstarter” crowdfunding campaign to purchase a video of Toronto Mayor Rob Ford allegedly smoking crack has barely surpassed the goal of raising $200,000.  The final tally ended at $201,254.00 just as Gawker was warning potential contributors they may not be able to obtain the video.

The crowdfunding campaign has continued to capture headlines around the world due to the sordid nature of the alleged video. Ford has continued to deny any involvement in a video that shows him smoking crack.

Ford, the 64th Mayor of Toronto, declared his candidacy for the office in 2010 and was elected later that year.  The youngest son of a wealthy Toronto based businessman, Ford’s political career has experienced no small share of controversy – including being arrested for DUI in Florida along with possession of Marijuana.  In 1999 Ford was pulled over in Miami smelling of alcohol.  The officer making the arrest reportedly found a marijuana cigarette in his back pocket as well. 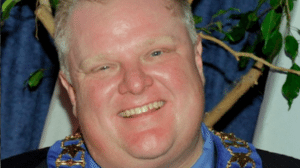 questioning the ethics surrounding the purchase of the video.

The campaign on Indiegogo was supported by 8,338 contributors. The highest reward level of $10,000 was purchased by a contributor who would potentially receive the iPhone that filmed the event.

Gawker has already stated that if they are unable to purchase the video, all funds will be dontated to a Canadian charity which addresses substance abuse issues.