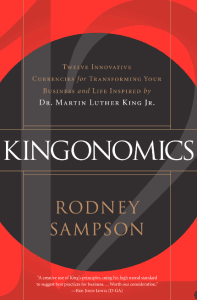 Rodney Sampson is a serial entrepreneur, investor and bishop from Atlanta, Georgia. He is also an author, having recently penned and released Kingonomics: Twelve Innovative Currencies for Transforming Your Business and Life Inspired by Dr. Martin Luther King Jr.

In tandem with the release of the book in January of 2013 was an announcement that Kingonomics would be coming to Washington DC in the form of an event during the 50th anniversary of Dr. King’s now-famous march on the nation’s capital.

Sampson began writing Kingonomics as a response to Dr. King’s last book Where Do We Go From Here: Chaos or Community? Sampson says that at the time of his assasination, Dr. King was in the midst of a transition of focus as he prepared to fight for and evangelize economic equality in minority communities.

King believed that the next phase in the movement would bring its own challenges, as African Americans continued to make demands for better jobs, higher wages, decent housing, an education equal to that of whites, and a guarantee that the rights won in the Civil Rights Act of 1964 and the Voting Rights Act of 1965 would be enforced by the federal government.The Martin Luther King Jr. Research and Education Institute, Stanford

Kingonomics focuses on the twelve currencies Sampson believes can be used to build successful relationships and successful businesses, most of which are non-monetary. Reciprocity, connectivity and relationships, diversity and more make the list.

His mission: to educate entrepreneurs in underserved, underrepresented and minority communities on the ins and outs of starting a business and, in the end, creating jobs. It’s a process that often starts with capital, but success often takes much more.

The book was announced in tandem with a series of events aimed at empowering underserved and minority entrepreneurs with the knowledge they would need to build businesses and create jobs in the 21st century, and that effort has dovetailed with today’s crowdfunding movement and its ethos of increased access to capital.

“Most minorities, when they think about raising capital, they go to every bank in town and get turned down by every bank in town because nobody really told them that banks don’t really fund startups,” Sampson told Crowdfund Insider. “Banks may fund you if you have two years of revenues, audited financials, maybe some equity in your house… but you have a lot of people just banging their heads against kind of a locked door of access because banks are not in the business of lending to startups.”

Less than 1% of venture capital is allocated to businesses with African American or Hispanic leadership. Crowdfunding has potential to narrow this gap in access to capital in a profound way. 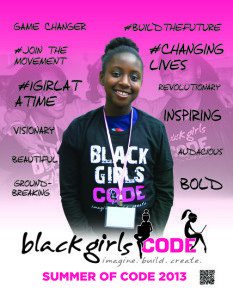 Sampson says crowdfunding has already had an impact among minority-owned businesses. One example is Black Girls Code, a San Francisco-based organization led by Kimberly Bryant that aims to “increase the number of women of color in the digital space by empowering girls of color ages 7 to 17 to become innovators in STEM fields, leaders in their communities, and builders of their own futures through exposure to computer science and technology.”

Sampson believes that crowdfunding will have the most impact in what he calls “click and roots” companies in minority communities. The “click” refers to high-tech companies such as mobile app developers and social utilities. “Roots” refers to grassroots projects such as the reclamation of distressed properties in and around these communities.

Another area where crowdfunding could have a major impact is in the $30-50 billion in mortgage debt principal that Sampson says is currently carried by black churches. “Imagine if we can use crowdfunding and reclaim that mortgage debt whereby members of the individual congregation that give their hard earned money… they also would have the opportunity to own micro-units or microshares of the mortgage that the church is paying off,” he said. “We believe that that now increases a sense of ownership in the church or the community and allows them to reclaim that debt, pay it down through their giving–but at the same time generate a return on their money.”

Sampson is also head of diversity inclusion for ABC’s Shark Tank, and during the Kingonomics event in DC he will be doing an open casting call for minority-run businesses. Those showing at the event have a shot at participating on the popular startup-focused television series produced by Mark Burnett.

The two-day event will include a gala on August 22nd recognizing those who’ve “transformed their respective industries and ecosystems, and will benefit initiatives that address poverty and the wealth gap via advocacy for education, entrepreneurship, access to capital and more.”

August 23rd focuses on entrepreneurial education and will include a session on crowdfunding.

The Kingonomics Conference and Bootcamps, scheduled for Friday, August 23rd will bring together over 100 experts in business and investment teaching thousands of entrepreneurs from across the United States and around the world to learn, engage, connect and collaborate. This conference will be an intense and interactive learning experience, where timely knowledge about access to capital, business growth and investments will come from leading executives and thought leaders. The Kingonomics Curriculum is divided into four tracks: Start.Up (for entrepreneurs and business owners) | Invest.Up (for investors and Pastors) | Sprout.Up (for youth and young adults) and Expose.Up (Raising money thorough Crowdfunding).