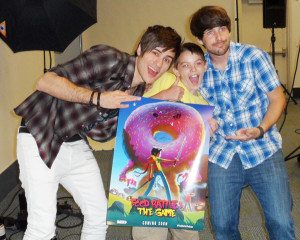 Registering 11,715,712 subscribers and 2,547,428,423 views and counting (yes 2.5 Billion views) YouTube channel Smosh is the most popular channel by subscribers on the entire YouTube platform.  As a matter of fact this competes with most broadcast networks today.  This video company started back in 2005 posting videos in the early days of YouTubers and has shot to the top.  The genesis of  a website started in 2002, Smosh now has 8 or so YouTube channels including a Spanish language version, games, contests and now they are crowdfunding.

Smosh is self described as;

“… the home of the best funny videos, games, photos, memes, blogs and galleries online. See the funniest YouTube videos, pictures and images online or chat with Smosh readers in our online forums. See cartoons and comics daily as well as our original series like Ian Is Bored and Lunchtime w/Smosh. Smosh is the brainchild of Anthony Padilla and Ian Hecox, and Smosh.com focuses on everything humorous, funny, or awesome from around the web.”

Already a very successful company Smosh is crowdfunding on Indiegogo to fulfill a “lifelong dream” of creating a video game.  Ian and Anthony want to turn their “Food Battle” series into a game and they are asking their many supporters to help out by crowdfunding $250,000.  The campaign started  in July – it ends on August 23rd – and they are already well on their way having raised over $100,000 to date. 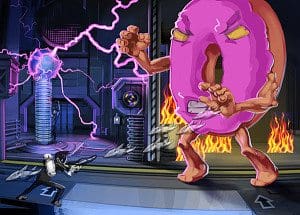 The game they want to create will be a multi platform (iOS, Android, PC), free, single player 3D action adventure game. Players get to traverse unique worlds where you can unlock and equip different foods as weapons, of course.  Rewards start a buck and go up to $3,200 where one person will have the privilege of appearing in an episode of Gametime with Smosh (Travel / Lodging not included).

This is a flexible funding campaign so funds are delivered regardless of final amount.  There is also a charity angle incorporated into the crowdfunding campaign.  Anyone can vote on which charity will receive the bulk of funds with the organizers guaranteeing a minimum donation of $1500 to each of the three.