The Eclipse is currently seeking $650,000 in funds via a flexible funding campaign on Indiegogo. The Eclipse aims to bring an effective self breast examination device to the home, allowing women to detect early signs of breast cancer sooner.

The Eclipse is accompanied by an app that works on Windows and Macintosh computers as well as iOS and Android devices. The app is very important in that it will log changes over time in regards to breast health.

The flexible funding model for a device such as this would normally raise a concern since fulfillment of hardware devices is often contingent upon having enough funding in order to manufacture the device itself. However, the team behind the Eclipse explains that a significant amount of funding has already been raised, making this Indiegogo campaign a pure pretail play.

We originally raised a significant amount of money from family, friends and business associates to develop Eclipse over the past two years. Now, we feel it’s important to not just create a business, but a movement behind improving how breast self-exams are done. 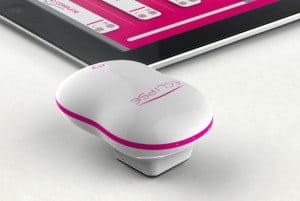 There is a caveat to this campaign. The device has not yet been approved by the FDA. The campaign page explains that feedback from early adopters will be used in applying for FDA approval. “To be absolutely safe, we recommend using Eclipse in a ‘training’ mode,” the campaign page states. “This means use the device only with the model breast we include in the Pink Pioneer Pilot Kit to practice the correct breast self-exam procedure.”

I believe this is a great advancement for breast cancer and perhaps beyond to other areas of the body. It’s as safe as using your own finger tips only much more sensitive and effective.  There hasn’t been anything like this for breast health which gives me as a physician quantifiable data to be more objective while also adding to better patient interaction.Dr Han Chiu M.D., MA, Stanford School of Medicine

It is estimated that that nearly 40,000 women will die of breast cancer this year in the U.S. alone. “Providing an effective means of early detection that leads to early treatment is essential in the fight against breast cancer,” said Ken Wright, founder and CEO of Eclipse Breast Heath Technologies. “I am deeply motivated to make a better future for my wife and daughter and generations of women ahead. The Eclipse is a powerful tool that puts breast health in the hands of women to simply monitor their own breast health to detect change or abnormalities early.”

The team outlines benefits of this device over traditional at-home breast exams.