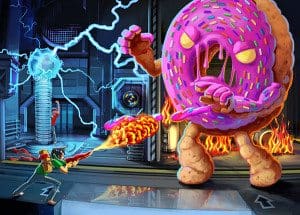 Smosh is a giant in the YouTube universe. With over 12 million subscribers, it is YouTube’s largest channel by subscriber base. Now the duo behind Smosh, Ian Hecox and Anthony Padilla, have closed a successful crowdfunding campaign on Indiegogo. The team landed over $250,000 in funding.

The funding is for a video game called Food Battle. The game pits the player against evil donuts. Seriously.

Food Battle: THE GAME is a 3D single-player action adventure game. Guide Anthony through multiple unique worlds where you can unlock and equip his favorite foods as weapons to help you battle Ian’s hordes of evil donut minions. And you’ll need every weapon in your arsenal if you hope to survive the pink frosted final boss!

The duo behind Smosh posted the following video thanking backers for contributing. The also explain that the game will take time to create. Apparently some backers were expecting delivery right at the time of closing. Watch below…