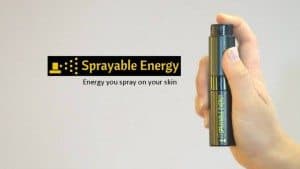 Pulling an all nighter and can’t endure another swallow of coffee?  Sprayable energy may be just the thing for you.  Cramming students and long haul drivers around the world may have found a solution to their fatigue.  In a way it sounds almost too good to be true. No more waiting for the caffeine to kick in after a late night dinner and a long drive home.  Just pull out your bottle of sprayable energy and off you go.  A quick spritz of caffeine is all you need to capture a quick energy boost.

This new consumer product is crowdfunding on Indiegogo now.  With 40 hours left in the campaign the organizers have already raised more than $150,000.  They launched their campaign on August 7th with a goal of $15,000.  Perhaps they set the initial bar too low.

After beating their goal by 1000%, organizers have set a final stretch attempting to his $200,000. $50,000 in less than 2 days would be quite a feat.  In a letter to backers co-founder Benjamin Yu expressed his own excitement to the overwhelming support he discovered in Indiegogo: 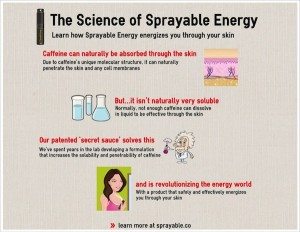 At no time in our wildest dreams did we ever think this would be possible. In fact, we clearly labeled our last stretch goal as *the final stretch goal*, because we never imagined we’d pass it so early.

But it happened, and it’s all thanks to you, our backers.

So as final thanks, we’ve thought long and hard, and we’ve decided to go out with a bang, and have one FINAL FINAL STRETCH GOAL! 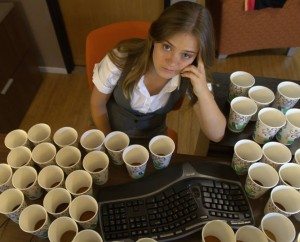 Caffeine happens to be a substance that can permeate the skin since it is both water and oil soluble.   The application process is designed as a steady even flow as opposed to that of a caffeine pill – where you get a big jolt all at once.  But is the product safe?  Organizers say the caffeine applied is less than a typical cup of coffee but users should use the product more than 6 times in any given 4 hour period.  If you are sensitive to caffeine of course stay away.  If I had to guess – just like anything else – moderation is the best approach.  I am a coffee lover but I can tell when I have maxed out.