The Gun Box aims to provide safe and secure storage for firearms. The project is currently crowdfunding on Indiegogo, seeking $100,000 in funding.

We believe in responsible home defense and we know there are a lot of other people who think the same way. That’s why we created The Gun Box. It really is safer, more convenient and a whole lot cooler than most other gun safes.

There are three ways to interact with the Gun Box. Users can choose to unlock the box using their fingerprint, or those with RFID chips can choose to couple the opening of the box to their unique chip signature. Backers without an RFID chip can pledge into any of a number of reward levels that include a wristband with an included chip. For extra security, owners can demand that both methods are used.

A premier version of the product is available with a year of free monitoring included. At this level, owners can be notified when their Gun Box is opened or tampered with. If anyone runs with the box, GPS technology will allow the owner to see where the box is in real-time. 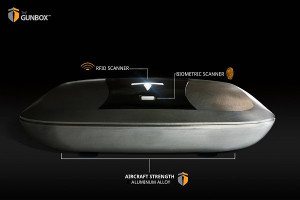 The flexible funding campaign has garnered just over $25,000 to date, but due to the funding model the project creators are going to get their funds regardless. If they can’t hit their $100,000 goal, the funds will be subject to an increased 9% Indiegogo success fee. Either way, the team is committing to bringing the Gun Box to market and shipping rewards to backers.

The campaign was launched by Utah-based RPH Engineering and Ryan Hyde. The firm was incorporated in 2009, but Hyde has over twenty years of engineering experience according to his Indiegogo profile.