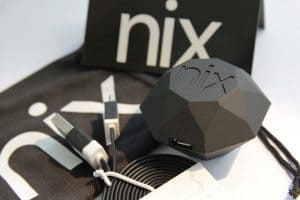 The Nix Sensor is described as a sort of Photoshop dropper tool for the real world. See a color you like in the world around you? Place the Nix sensor on top of it and it now becomes easily replicable in a digital environment.

It was a product tailor-made for crowdfunding… a new spin on technology that fulfilled a niche need in the market. The market spoke, and they liked Matthew Sheridan’s idea enough to pledge over $65,000 on Kickstarter in a campaign that ended in October of 2013.

It worked out so well, Sheridan is crowdfunding again for the same product, albeit on Indiegogo for this go-round. He set a low goal of $500 (a smart strategy for any crowdfunder that doesn’t need big money to deliver) and has eclipsed that handily, raising just short of $15,000 at the time of writing with six days to go.

The first 300 backers of this new campaign will receive their rewards along with batch one, which is scheduled to be shipped next month. It stands to mention that Sheridan is late to deliver as far as his Kickstarter campaign page is concerned. Delivery was slated for February. Having said that, I can sense no vitriol in his going back to the crowd for more money before delivering on the first campaign. (It does, however, raise some ethical questions.)