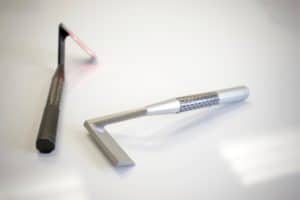 Laser Razor, a crowdfunding campaign we covered last weekend, has encountered a bit of a success. Signing up on Kickstarter to raise a mere $160,000, the campaign now stands at over $1.8 million. Launched on September 21st, the Skarp product has now captured over 10,000 backers – all for a new spin on shaving.

The campaign creators stated, “We’ve had a crazy week! It’s been amazing to see the response to the Skarp Razor. We knew we had something special, but you’re never sure how people will react.”

Now the stretch goals are in:  Set at $2.5 and $3 million, this campaign has plenty of momentum to get it there. It is the most funded, live project, on Kickstarter today and it is quickly scaling to the top of the campaign ladder.

And why all of the interest?  Well, shaving and razors have pretty much remained rooted in its analog past.  Outside of the advent of the electric razor, Skarp has delivered the biggest innovation in shaving – ever. A laser powered device that clips hair without foam or water and eliminates the need for disposable razors.  I wonder what Bic, Schick and Remington think of all this? If they have not yet taken notice – they soon will.