We successfully raised $40,000 for Hours with an entirely private crowdfunding experiment — here’s how.
It was a crazy idea; it broke nearly every rule; it was just a hunch; but ultimately, it worked better than we had hoped. If we’d listened to conventional wisdom, none of this could’ve ever happened.

About a month ago, we began running a private crowdfunding campaign to speed up the development of Hours Cloud — the team-compatible web version of our time-tracking app, Hours. 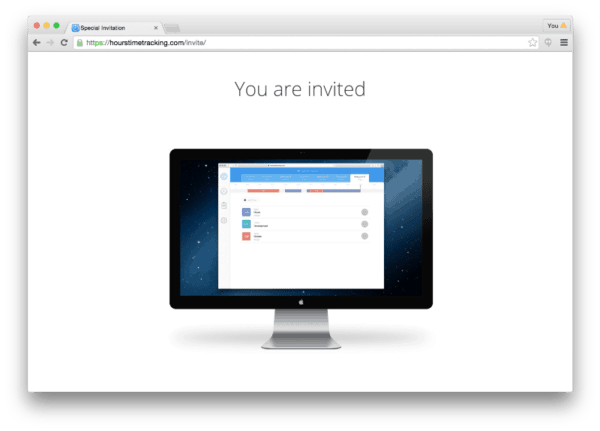 Since the campaign has gone public, I wanted to share some of the key lessons learned from successfully running what might’ve been the first ever completely-private crowdfunding campaign for a business app.

1. It’s possible for a business software startup to be crowdfunded

I did a ton of research on crowdfunding, and I couldn’t find even one tale of success for business software — only stories of woe and sorrow, and advice to stay far away. Conventional wisdom tells us that crowdfunding typically works only for products with impulse-purchase potential and mass appeal. There is just no way a company would risk its money on software that doesn’t even exist yet.

Despite strong evidence against the idea, we took the plunge anyway. I am thrilled to say that the campaign has blown away all of our expectations up to this point.

It might not quite be at Pebble’s level, but keep in mind that this campaign was completely private — no press at all or potential for virality. We’ll be watching the results even more closely now that the campaign has gone live to the public, and we’ll share an update once we see those numbers.

2. Exclusivity is a powerful tool 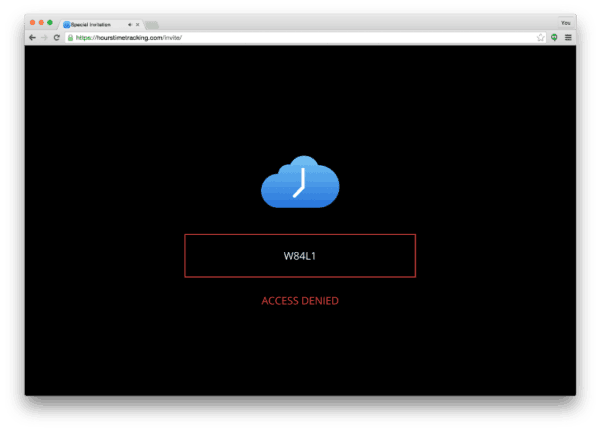 This was completely counter-intuitive. One would think that you’d need to make it as easy as can be for your supporters to hand over money, right? The honest truth is that if something is readily available to everyone, it’s not really all that special. I know if I were selected as part of an exclusive group to participate in something before anyone else could, I would be a lot more likely to check it out, at least.

As we began sending out the first wave of invitations, we built up anticipation by teasing our campaign on Twitter.

What’s this all about? http://t.co/i3zVVCIFBD Check your inbox over the next few weeks to see if you get an invite pic.twitter.com/nvQQFX9rZs

Every day we sent out a few more invitations while continuing to tease it on Twitter.

Next batch of invites just went out so keep an eye on that inbox. Response has been INCREDIBLE so far. Sneak peek: pic.twitter.com/UfpASzO0Q1

Rather than sending market-y invites full of images and screenshots, we sent out emails with a much more personal tone with a direct line to ask us any questions (and we received a lot, by the way).

The subject was simply “You’re invited!” While not very informative, it turns out people really enjoy being invited to stuff. 67% of people received an invite to opened the email (4x the industry average of 16%).

In addition to exclusive invites, we took another counter-intuitive step. We made it kind of tough to get in, including for invitees.

Rather than a simple link to a website, the page required a password to get in, which we provided with the email. 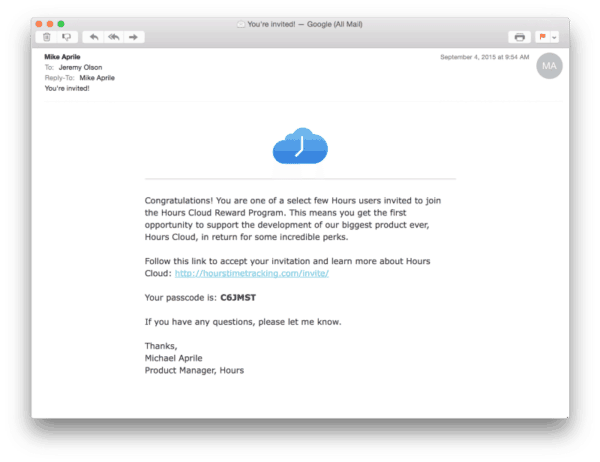 Adding multiple steps is typically a good way to turn people off, but let’s look at the numbers:

49% of people who opened the email clicked the invite link.

I wouldn’t call myself an email marketing expert, but I think by most measures that is a pretty strong conversion rate.

The password made people see that this is legitimately exclusive to them — it really is special. If something is seen as special, it should be worth at least checking out. Of the people who clicked the invite link, the vast majority of them took the additional step to enter the password.

A private campaign also enabled us to target specifically toward our existing users. For example, in the campaign video we could assume that the recipients were already active Hours users. Because of that, we could better speak to their needs (versus the now-public campaign which needs to introduce Hours more generally).
Another important note is that exclusivity wasn’t just a mirage. We didn’t send out 16,000 emails all at once and call it exclusive. We trickled them out over four weeks with a combination of hand-picking users and sending invites based on the length of time they have been on our mailing list. Those who got the email first had the real benefit of getting discounted early bird rewards, which ended up selling out much faster than we expected.

3. Companies are willing to invest thousands in software that doesn’t yet exist 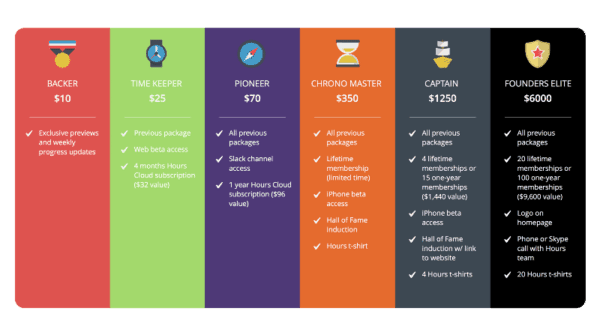 This one blew my mind. Our early bird packages ranged from $8 to $5000. The $5000 package included $9600 in subscription value, as well as a call with our team but to plunk down that kind of money, companies would really have to believe that the product would solve major problems for them.

Thankfully, they did. It was just a few minutes after we sent out the first few hundred invites. *ding* — the Stripe message popped in on our Marketing slack channel: someone just purchased 10 lifetime memberships for his team for a total of $2500.

Then a week later two companies purchased our top plan. So just three companies accounted for over $12,500 in sales! And that is on top of the dozens of companies that invested hundreds of dollars each in our smaller packages.

So yes, some companies will fund your product early if they think it will really impact their business and if they think they will ultimately get a good bang for their buck.

4. You don’t need Kickstarter or IndieGoGo

I think Kickstarter and Indiegogo are great and I’d encourage you to take a good look into them. Without these sites, this campaign very likely would not have worked because the whole concept of crowdfunding wouldn’t make much sense to people. 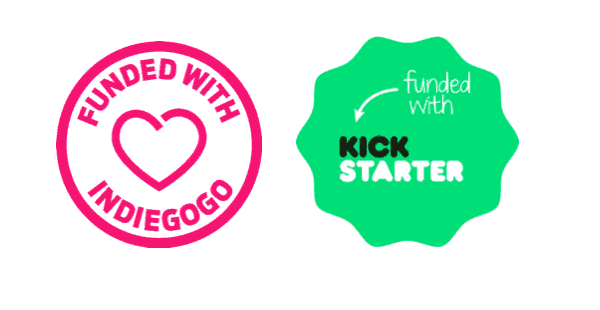 There are some reasons we decided to do our own custom site using Bootstrap, HTML/CSS, and Stripe for payment:

We certainly spent a good amount of time creating the custom website, but you have to spend a fair amount of time to create a good Kickstarter video and page regardless, and we feel the extra work paid off pretty well.

5. Having a community is greater than money

Our main priority for running this campaign was actually not about the money; it was to create a community of commited early adopters and evangelists — a group of users who we could bounce ideas off of, gather feedback from, and who ultimately would help us to get the word out on launch day.

That is why every one of our backers gets an update every week. These weekly updates include the latest progress, an exclusive preview of a major new feature, and a survey at the end to collect structured feedback.

We use Typeform to make really nice surveys with videos and screens, and I highly recommend checking it out. The surveys have given us a ton of useful feedback.

Check out our first update to get an idea of how we did this(and feel free to fill out the survey if you like). 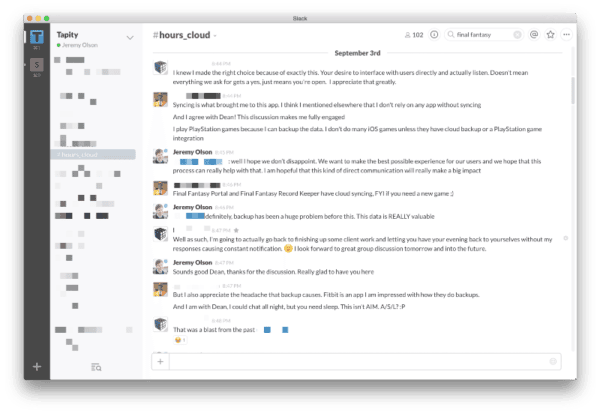 This is technically a part of the last section, but this was so huge for us that it deserves its own heading.

Starting from the mid-range Pioneer reward package, we offered access to join an exclusive Slack community where users are given direct real-time access to the entire Hours team.

This has arguably been the best thing to come out of the entire campaign. Backers have been extremely active, thoughtful, and thrilled to be part of this process. We have been getting so many ideas that we had to create a Trello board to organize them all and to continue discussion.

Sure, users can email us at any time with their ideas, but real-time communication between users and the whole team feels completely different and refreshing.

Something magical begins to happen when you connect users directly with your team: it starts to feel like the two are one and the same.
Now these incredible folks are invested as users, financial supporters, and members of our extended team who want to see this thing to succeed as much as we do.

Having a group to quickly bounce ideas off in a casual way is going to be invaluable in improving Hours in the upcoming years. We stumbled upon it because of the crowdfunding campaign, but this is something we wish we had started a long time ago.

Crowdfunding is a new adventure for us, and this wouldn’t have been possible without the advice from Dan Counsell’s excellent article on the topic — so huge thanks to him for that. I only hope this article might inspire someone like Dan inspired me.