Axanar Productions, a film studio located in California, launched a crowdfunding campaign on Indiegogo this week to raise funds for the first studio-quality independent film in the Star Trek  franchise.

According to its description, Star Trek: Axanar is a feature film, but will be broken down into four episodes following the four acts of the script. The studio shared:

“Axanar is the first independent Star Trek film.  While some may call it a ‘fan film’ as we are not licensed by CBS, Axanar has professionals working in front and behind the camera.  A fully professional crew, many of whom have worked on Star Trek itself ensure Axanar will be the quality of Star Trek that all fans want to see.

“But Axanar is not just an independent Star Trek film; it is the beginning of a whole new way that fans can get the content they want, by funding it themselves.  Why dump hundreds or thousands of dollars a year on 400 cable channels, when what you really want is a few good sci-fi shows?  Hollywood is changing.  Netflix, Hulu, Amazon, and other providers are redefining content delivery, and Axanar Productions/Ares Studios hopes to be part of that movement.” 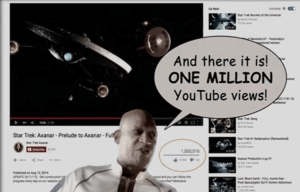 The budget for all four episodes will be just under $1 million, that means each will cost approximately $250,000. The funds for the project will also need to cover a portion of the ongoing studio costs, and the cost of Indiegogo, payment processing, and perks. After all that’s said and done, each episode will be around $330,000 all together.

Since its launch on Wednesday, the campaign has raised nearly $175,000 from over 1700 backers. It is set to close mid-August.