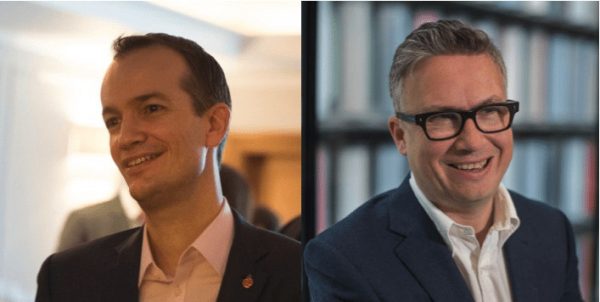 Innovate Finance has announced the appointment of Danny Lopez and Iain Anderson as non-executive directors of the organisation.

Lopez is the Chief Operating Officer of Blippar, a technology company specializing in augmented reality and artificial intellegence. Between 2011 and 2016 Lopez was the British Consul General to New York and was Director General of UK Trade & Investment in the United States. He played a vital role in leading the UK’s efforts to promote transatlantic trade and supported Innovate Finance’s outreach initiatives in America.

Anderson is the co-founder and executive chairman of Cicero Group – an agency that specializes in public policy and corporate communications strategy, supporting many global FTSE and Fortune 500 blue chip organizations.

“Innovate Finance is delighted to announce the appointment of two new non-executive directors. Danny Lopez and Iain Anderson join the organisation with impressive and complimentary experiences, with a strong passion for FinTech. Their knowledge and expertise will provide valuable CEO and board-level counsel as Innovate Finance continues to support the FinTech sector.”

Additionally, Innovate Finance said that Nick Hungerford will step down from his role as non-executive director after three years at association. Ceeney thanked Nick for his significant contribution to the organization as one of Innovate Finance’s founding NED appointments;

“Nick’s experience as a FinTech founder and entrepreneur, coupled with his knowledge of the sector and global FinTech network, have been hugely important in helping us establish and build the organisation.  Nick has been with Innovate Finance from its inception in 2014. I’d like to thank him for his time and counsel, and wish him all the best for the future.”