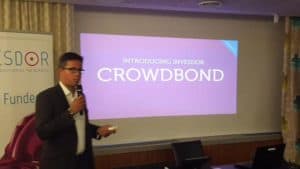 In a post on LinkedIn, Invesdor founder Lasse Mäkelä has announced the platform he launched has identified a new CEO. Mäkelä did not identify the name of the new executive.

“As many of you also know, Invesdor has been in search of a new CEO and we finally have it! Although there has been some customary challenges with the merger with Finnest, getting our new CEO on board and in re-alignments of the group, I am convinced that we will come out of these changes as a real powerhouse in our industry.”

Mäkelä launched the crowdfunding platform in 2012. Today it has grown to 35 people in the Nordics and the German-speaking region of Europe (or DACH). The expansion came largely due to a merger with debt focused crowdfunding platform Finnest. The combined entity has raised over €130 million in equity, bond, and debt financing so far.

Invesdor/Finnest also offers a “Platform as a Service” as it expands into other verticals.

Mäkelä said he is excited about working more directly with entrepreneurs and other customers. Expect the name of the new CEO to be officially revealed soon.