Weeve had received covered in many different press outlets including TechVibes, TechCrunch, The Digital Journal and The Huffington Post. Weeve was named as one of the “top 6 coolest companies to watch” by The Metro and described as the startup “set to disrupt nonprofit fundraising” by The Digital Journal.

LX Ventures plans to take Weeve’s sophisticated crowdfunding framework and repurpose it for use in other industries that are ready for disruption. Ray Walia, COO of LX Ventures stated,

“Weeve’s crowdfunding technology is a natural fit for our FinTech market vertical. Together, we will internally innovate and deliver revolutionary funding solutions across multiple market sectors.”

“We couldn’t be more thrilled to join forces with LX Ventures. With LX Ventures accelerating our growth with their business intelligence, we can continue to innovate and take crowdfunding to new heights.”

LX Ventures is a publicly traded technology incubator that launches, integrates, and acquires early stage high growth technology companies. We are a group of entrepreneurs dedicated to developing the next generation of entrepreneurs by providing funding, resources, mentorship, and access to our global network.

Weeve announced the acquistion in the letter below:

We are happy to announce the news that we have finalized an acquisition deal with LX Ventures (TSX.V: LXV). Since launching in July 2012, Weeve was on a mission to revolutionize the way we give back to our communities. We’ve built schools, hospitals and playgrounds. We’ve fought for environmental and women rights. We’ve brought together thousands of communities to drive positive social change. I am proud to say that we’ve changed the world- one community at a time. 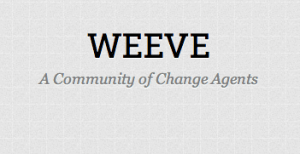 Today marks a significant step for Weeve. We couldn’t be more thrilled to join forces with LX Ventures because we believe that together we can bring crowdfunding to new heights. Forbes recently reported that annual crowdfunding transaction volume can go up as high as $500 billion dollars annually compared to 2011’s $1.5 billion. As we see more and more crowdfunding platforms emerge in the market, it’s a signal for the Weeve team and LX Ventures to disrupt this proven market.

LX Ventures plans to take Weeve’s sophisticated crowdfunding framework and repurpose it for use in other industries that are ready for disruption. Take equity crowdfunding for example- since the approval of the JOBS Act, entrepreneurs can now raise one million dollars via equity crowdfunding. There is a huge opportunity in this market and 2013 is only the beginning of a world-wide startup renaissance.

Our world is moving towards a more democratic future where voices can be heard and dreams can be fulfilled. Weeve still stands by this belief and LX Ventures is here to make it come true.

Thank you for your continued support and for being part of the Weeve community.