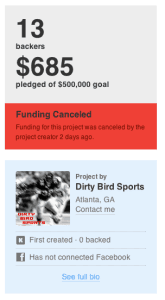 Not all games on Kickstarter are what they appear, as a title aimed at US College Football fans was recently pulled from the crowd funding site after potentially fraudulent claims were exposed.

Boasting a backing from well-known Atlanta Falcons running back Jamal Anderson, the project claimed that it was hoping to create a competitor to EA’s NCAA Football game (pictured above) and only needed the relatively paltry sum of $500,000 to develop a PS3 and Xbox 360 title.

However, many of the 3D models and assets compiled by the group, calling itself ‘Dirty Bird Sports’, were found to have been lifted from sites selling other artists work, a roundup of which can be seen at Kotaku.

Jamal Anderson, the game’s supposed backer, had also never agreed to work with the company…