Seeking to raise funds for a cause close to his heart, author of the “A Song of Ice and Fire” series, also known as “Game of Thrones,” George R.R. Martin launched a crowdfunding campaign on Prizeo earlier this week for support of the Wild Spirit Wolf Sanctuary and the Food Depot of Santa Fe. The initial campaign goal is $200,000. 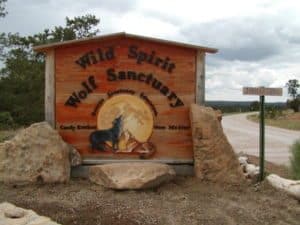 While addressing the key reasons for the campaign,  Mr. Martin wrote in a statement,

“I’ve always been fond of wolves… direwolves in Westeros, and real wolves in the real world. US wolf populations hit critical lows during the twentieth century, and finding a way for humans to co-exist with this majestic creatures is an important part of the conservation movement.”

“The Wild Spirit Wolf Sanctuary is a 501(c)3 non-profit organization that houses over 60 wolves and wolf-dogs. Most of these animals are rescued, but don’t have the skills to survive in the wild because they were raised in captive situations.”

“I’m also supporting The Food Depot, an amazing local charity that helps the tens of thousands of people in North New Mexico. As the food bank for nine counties, The Food Depot provides food to 135 not-for-profit agencies including food pantries, meal programs, homeless shelters, youth programs, senior centers, homes for the mentally disabled and shelters for battered persons. The food bank distributes an average of 400,000 pounds of food each month, providing more than 500,000 meals to people in need – the most vulnerable of our community – children, seniors, working families and those in ill health.”

“I can’t thank you enough for helping these two organizations that are so close to my heart.”

Also sharing what the backer will receive for their donation, Mr. George noted, “If you make a small donation to my campaign, you will automatically be entered to win an incredible experience. You and a friend will be flown out (from wherever you are in the world) to meet me in Santa Fé, where we’ll share a helicopter ride to the Wild Spirit Wolf Sanctuary.

“In addition to touring the Sanctuary together, we’ll also have plenty of time to discuss the show, ‘A Song of Ice and Fire,’ direwolves – and if there’s anything you have ever wanted to ask me, here’s your chance!”

Other perks include a signed and dedicated “Game of Thrones” cookbook; a handwritten thank you note; tickets to the Season 5 premiere; breakfast with George; and for $20,000, Mr. Martin will make the backer into a character and will kill them off in his upcoming book.

Since the launch on June 3rd, the campaign has raised $129,206. Backers have until August 4th to donate.