The Epilepsy Foundation announced this week a call for entries for the fourth annual epilepsy “Shark Tank” competition and is accepting submissions that represent the most innovative ideas in epilepsy and seizure treatment and care. The deadline for submitting a letter of intent is February 2, 2015. The selected finalists will receive international recognition and compete for grants totaling $200,000 to support the development and commercialization of important new products, technologies or therapeutic concepts.

Finalists will present their product concepts on the second day of the 2015 “Anti-Epileptic Drug and Device Trials” (AED) conference, sponsored by the Epilepsy Study Consortium in collaboration with the University of Pennsylvania Epilepsy Center and the Epilepsy Foundation, to be held May 13-15 at the Turnberry Isle Resort, Aventura Florida. The “Shark Tank” event will feature live voting among audience members and a panel of judges representative of industry, advocacy, investors, and the research and medical communities. The winning project or projects deemed to be the most innovative will be announced at the live event on May 14.

“The ‘Shark Tank’ competition receives entries from countries around the world and continues to grow in popularity and interest each year,” said Philip M. Gattone, President and CEO of the Epilepsy Foundation. “The program is a catalyst for entrepreneurs, scientists, engineers and the broader community to develop inventive product concepts and technologies with the promise of improving treatment and/or quality-of-life for the more than 65 million people living with epilepsy and seizure conditions. There remains a critical need for more effective therapies for millions of people who still live with difficult-to-treat seizures and side effects despite available therapies.” 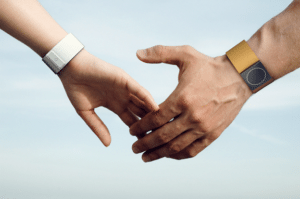 Innovative products such as the Embrace — a finalist in the 2013 Shark Tank competition — help detect the onset of seizures and may potentially save the lives of those at risk for Sudden Unexpected Death in Epilepsy (SUDEP). The Embrace is an all-in-one watch and medical-quality wearable device designed for people seeking to improve their lifestyles by monitoring their daily behavior. Empatica, Inc., the startup that developed the Embrace, has partnered with the Epilepsy Foundation on an Indiegogo crowdfunding campaign that launched yesterday. The campaign will raise awareness of the condition and help those living with epilepsy by donating Embrace wearables.

By February 2, 2015, applicants must provide a letter of intent outlining their project goals and the near-term potential benefit to people with epilepsy or seizures, as well as the deliverables expected as a result of the grant. Applicants must demonstrate an ability to move the proposed plan to completion, showing how the prize can accelerate any step along the path to market.

All applicants will be notified by February 17, 2015. The Shark Tank review committee will select as many as six finalists. All finalists will be invited to present their product concepts or candidates at the 2015 AED Trials Conference, scheduled from May 13-15, 2015. All finalists are eligible for a travel stipend to attend the conference and free conference registration.

Some examples of novel and exciting concepts could fall into the following innovative categories:

Three winners of the 2014 Shark Tank competition received prizes for the most innovative ideas in epilepsy and seizure treatment and care. Oren Knopfmacher, PhD, received $75,000 for an in-home, non-invasive device that monitors anti-seizure drug levels in saliva developed by Avails Medical, Inc. Jon Davis won $50,000 for Shower Power, a safety monitoring system that is designed to track when seizure events occur during a shower. The 2014 People’s Choice award for $75,000 was given to 13-year-old Amir Helmy and his father Ahmed Helmy for Seizario, a smartphone app that detects and alerts loved ones when the owner of the phone is having a seizure. The winners use their prizes to advance their products to the next phase of development.