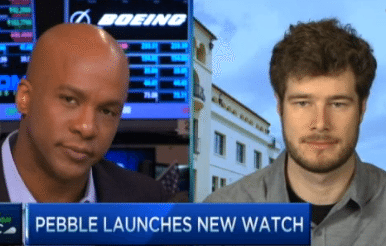 Pebble CEO and founder Eric Migicovsky is making the PR rounds alongside the spectacular launch of the Pebble Time crowdfunding campaign on Kickstarter. Everyone is comparing it to the forthcoming Apple Watch as a David vs. Goliath battle looms inside the octagon.  Migicovsky is pretty confident is Pebble’s position stating they are the most popular Smartwatch in the world right now.  He states that Pebble Time is the watch the consumers actually want.

Pebble has clearly pointed at one of the differentiating aspects of the Pebble Time is the 7 day battery life versus the expected one day tops for the Apple Watch.

Pebble Time has already captured over 44,000 backers as it nears $10 million in funding for this pretail round.