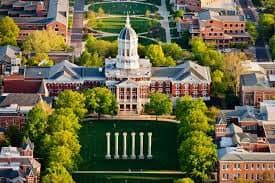 The new comprehensive campaign will seek to raise $1.3 billion to support and advance the educational and research goals of Missouri’s flagship university. Mizzou: Our Time to Lead will help to elevate MU’s status in the Association of American Universities (AAU) as well as significantly increase the University’s capacity for education, research, and student and faculty recruitment.

Fundraising efforts for Mizzou: Our Time to Lead will focus on three priorities:

“Private philanthropy is vital to the education and research missions of the University. Our generous donors help us support student scholarships and attract and retain top-notch teachers and researchers. Supporting and increasing the number of MU’s signature centers and institutes, advancing our academic mission through new buildings and facilities, and growing our endowment will help position MU to be a leader in education and research for Missouri, the nation and world now and far into the future.”

To date, Mizzou: Our Time to Lead has raised $650 million in the silent phase of the campaign. Tom Hiles, MU vice chancellor for advancement, says the momentum for the campaign has been building steadily for months. He shared: 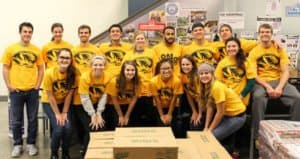 “We are incredibly excited about the generosity and forward thinking we have experienced so far when speaking with passionate MU alumni and supporters of higher education around the state, nation and world. MU truly has a global impact, which is proven by the enthusiasm of everyone we talk with about Mizzou: Our Time to Lead. This campaign will elevate the University to new heights of excellence in education and research, and we are energized to advance and support MU’s mission for decades and centuries to come.”

Mizzou: Our Time to Lead is directed by the leadership of campaign tri-chairs Cathy Allen, José Gutiérrez and Richard Miller.

“José, Cathy and I feel honored to represent all donors to Mizzou as tri-chairs of the Mizzou: Our Time to Lead campaign. With this effort, we have the opportunity to propel MU to the top tier of public universities in the nation. Donors to Mizzou represent a number of constituencies, including proud alumni, grateful patients and passionate fans, but we all support Mizzou because we believe in its mission of academic and athletic excellence. This campaign will ensure Mizzou’s continued excellence for generations to come.”

MU is one of 23 universities around the country currently engaged in $1.3 billion-plus campaigns. This new campaign comes six years after MU wrapped up it’s first-ever $1 billion campaign, For All We Call Mizzou, in 2009.