As backers of the Indiegogo success Con Man continue to wait patiently for the highly anticipated series, the campaign’s team announced a delay in the project’s perks (which includes the DVD/Blu-ray of the first season).

It was revealed in the latest update:

“None of the perks have shipped as of yet. Our digital perks will be sent via email in a few days. Our shipping supplier is bogged down but promises to get them shipped before Christmas. We hope that bulk of the perks will ship within a week or two with the dvd’s and blu rays being shipped in January 2016. We apologize for the inconvenience this may cause as some of you wanted to have your perks as a gift this season. We thank you for your patience and for being our loyal fans.”

Earlier this year,  Firefly duo, Nathan Fillion and Alan Tudyk took to Indiegogo with a mission to raise funds for the web series. Its synopsis reads:

“Wray Nerely (Alan Tudyk) was a co-star on Spectrum, a sci-fi series which was canceled -Too Soon- yet became a cult classic. Wray’s good friend, Jack Moore (Nathan Fillion) starred in the series and has gone on to become a major movie star. While Jack enjoys the life of an A-lister, Wray tours the sci-fi circuit as a guest of conventions, comic book stores, and lots of pop culture events.  The show will feature all the weird and crazy things that happen to Wray along the way to these events.” 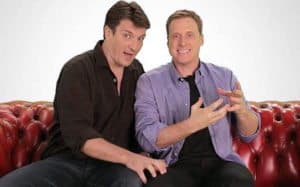 “It’s about the convention world. My character, Wray Nerely, was on a science fiction show called Spectrum, that was canceled too son, and now he goes to conventions, to sign head shots, meet fans and do panels. Nathan’s character, Jack Moore, who was the captain of the spaceship on Spectrum, has gone on to incredible action-hero stardom, like Matt Damon. My character is frustrated with his situation and frustrated by Jack’s stardom. We follow Wray’s story as he goes to the conventions and does video game voiceovers and we are going to popular it with sci-fi actors and people that you will find at conventions. Zany hi-jinks ensue!”

Con Man finished its campaign at a total of $3,124,214 and became the third biggest crowdfunding campaign of all time for film on any platform.