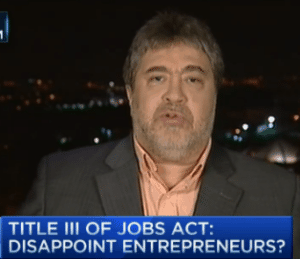 Jon Medved, founder and CEO of OurCrowd – an accredited crowdfunding platform, spoke to CNBC last week and addressed the launch of Title III or Reg CF crowdfunding. Medved, never one to mince words, stated there are certain problems with Reg CF, as it stands now.

Medved believes that most of the Reg CF platforms will not be applying curation and will “let the wisdom of the crowd decide.”  He also says the whole economic model is to raise the money and move on. “There is no one there to watch the shop after you have handed money over to a little startup.”  The solution to much of his concern? The Fix Crowdfunding Act that is moving around the House of Representatives now. The proposal in the House will raise the funding cap to $5 million and allow SPVs – both beneficial to issuing companies and investors.

“Why should you punish a company that is doing great and wants to raise more than a million dollars and can’t,” asks Medved.  “That’s nuts. It makes no sense whatsoever.”

Will there be more trash than treasure?

Indiegogo CEO David Mandelbrot disagrees with Medved. Indiegogo, as many people know, is preparing to launch their own version of equity crowdfunding.