Camden Highline has raised £63,980K on Spacehive, almost double its initial target a month after beginning its crowdfunding campaign. The campaign benefitted from a wave of support from the Mayor of London Mayor of London Sadiq Khan and Camden Market, who joined over 300 residents, community groups and businesses who donated to the campaign for a new city park. 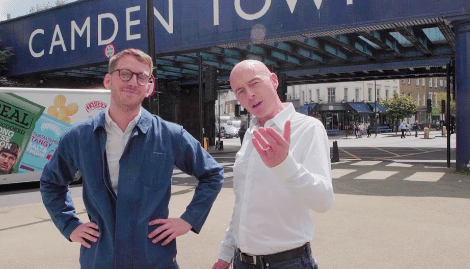 “This is a small but very significant step towards construction. We want to thank everyone who has donated to the campaign, from the Mayor to businesses, residents and community groups – we couldn’t have done this without you!” celebrated Camden Town Unlimited Chief Executive Simon Pitkeathley. “Your support has been incredible and means we can begin the next stage of work with the best possible chance to turn this idea into a reality!”

The money raised will be used for feasibility work to establish key details, including the condition of the existing infrastructure, the resources required for transforming the disused railway and timelines to completion. The crowdfunding campaign funding will also help establish a new community organization that focus on Camden Highline events and workshops that will guide the project’s aims and ambitions. 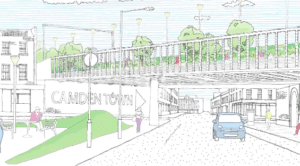 The project, inspired by Manhattan’s iconic High Line, would link Camden Market with the recently redeveloped King’s Cross area by transforming a disused railway line in Camden into a new public park and garden walk. The 8 metre high, 18 metre wide, disused railway line crosses 8 roads on 7 existing bridges and was originally built as part of the North London Railway, now the North London Line, which is part of the London Overground network. The western end of the proposed route begins on the north side of the North London Line above Kentish Town Road. The proposed route then travels eastwards, to the north of Camden Road station (the section with the largest width), towards Caledonian Road & Barnsbury station, over several intact but disused railway bridges, and finishes by Camley Street, which leads into King’s Cross. 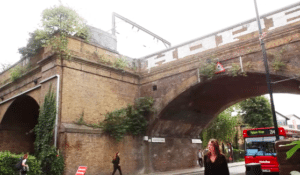 The Camden Highline is a project proposed by campaign group Camden Town Unlimited, the business improvement district for Camden Town. CTU is accountable to its members and is elected every five years to improve Camden as a place to work, live and visit. CTU’s management team is overseen by a board of local business leaders, residents, politicians and the police, who are elected annually from its business membership. Since 2006 CTU has carried out a range of projects, including streetscape improvements, lobbying, crime and green initiatives, local discount schemes, marketing campaigns, public art, festivals, pop up shops, and supporting young entrepreneurs by transforming vacant and underused space for temporary use as part of the award-winning Camden Collective project.

People may also learn more about the Camden Highline during the London Design Festival, held on 16-24 September 2017. The Camden Highline will feature an exhibition spotlighting the proposed route while running a series of events, workshops and walking tours.