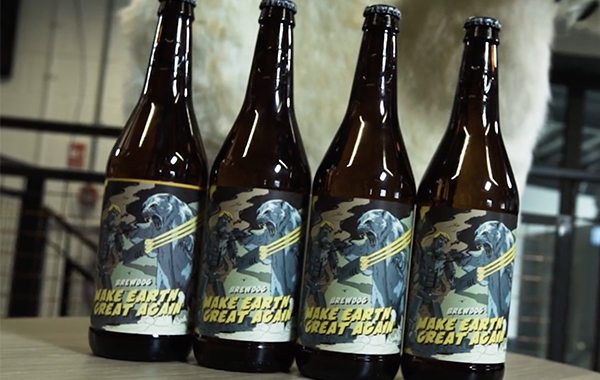 Just a few months after President Donald Trump announced his intention to withdraw the U.S. from the Paris Climate Accord, crowdfunding success BrewDog launched a “Make Earth Great Again” beer in protest of the leader’s decision. 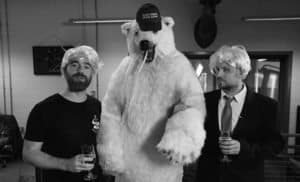 Make Earth Great Again is described as a saison style beer, which is fermented at a higher temperature than any other beer style. The brewery noted that this is an appropriate nod at the effects of global warming:

“After America’s withdrawal from the Paris Accord, BrewDog decided to take a stand with a new beer that will be served directly from a beer tap built into an artificial, life-size polar bear head, one of the greatest casualties of climate change.”

Brewdog revealed that the beer also contains ingredients sourced from areas most affected by global warming. All proceeds from Make Earth Great Again will be donated to 10:10, a UK-based charity working to safeguard the earth and ensure the rights of all people to air, water and the wild. BrewDog USA CEO, Tanisha Robinson, stated:

“As an American, I’m both infuriated that our country has shied away from addressing climate change and proud to be a part of a community of punks who are willing to take a stand. By donating proceeds to an organization that directly fights climate change, we are enabling every single person who drinks Make Earth Great Again to join together to amplify their voices for this cause.” 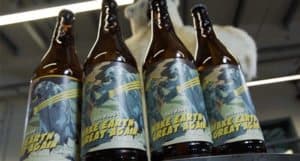 “Make Earth Great Again is a reaction to declining interest from notable world leaders to the biggest issues facing our planet and civilization. Beer is a universal language, with the capacity to make an impact the world over, so we decided to make a statement and brew a beer that could have a direct, positive impact on climate change both through supporting an organization making a difference, and providing a vehicle for craft beer fans to make their voices heard by the establishment.”

Watt added that the beer is considered the brewery’s statement of intent to hold a mirror up to all of the establishment figures that could and should do more on an issue that affects everyone on the planet. Watt and his team hope everyone who can make a positive impact on climate change at a legislative level takes note of what the beer represents.

Meanwhile, BrewDog has returned to the UK with a securities offer following the end of its U.S. Reg A+ crowdfunding round. To date, BrewDog has raised around £41 million in its four prior crowdfunding rounds, enlisting over 53,000 shareholders making it one of the most successful investment crowdfunding offers of all time. Equity for Punks V seeks a minimum £10 million raise at a per share price of £23.75 (minimum purchase of 2 shares). The crowdfunding cap stands at £50 million.