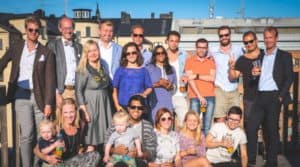 FundedbyMe, a Sweden-based investment crowdfunding platform, has announced that is of this were it had topped 100,000 global registered investors. While based in Sweden, FundedByMe operates in multiple European countries and in Asia and has 6 different physical locations.

FundedByMe said surpassing 100,000 investors was a historic milestone that confirms the strength of crowdfunding and the strategy of the platform. Of the 100,000 individuals, about 65% are from Sweden and the balance from the rest other Nordic countries, Europe and Asia. The company has successfully established itself as a global crowdfunding company and is widely respected by the industry. FundedByMe said the recent partnership with Privanet in Finland, these figures are expected to grow exponentially.

FundedByMe shared several other milestones having taken place during 2017:

FundedByMe is in the midst of a self-crowdfunding campaign which has easily topped its minimum goal. FundedByMe has announced its intention to pursue a listing on a public exchange at some point in 2018.