Finished that turkey sandwich and thinking about your next meal? Hungry for investment? Want to support former U.S. military members? Want to provide some hurricane relief and renewal to Houston? Look no further. Pokéology restaurant group specializes in serving Hawaiian poke, a simplified version of “sushi-in-a-bowl.” Leading the culinary pack is Rice Village’s Pokéology, an operation from acclaimed sushi chef Jason Liao that opened this past January. The team managed to make its current non-traditional space into a destination. With plans to expand with a more complete dining experience in Houston’s Sawyer Yards, the team has synced with NextSeed to bring this tasty plan into fruition. To date, the crowd has invested over $87K toward the $150,000 minimum goal for 13.25% equity.

Founded by U.S. military members and lifetime martial artists, the Pokéology/Semper Fi Restaurants team brings discipline into the business.  Destination: 2313 Edwards Street. An upcoming area with chic boutiques, restaurants and studios, Pokéology’s Sawyer Yards location will increase the visibility of what the Pokéology team does best: “serves up fresh, delicious and healthy bowls of poke with stellar customer service.”

“Pokéology will continue to source fresh sashimi-grade seafood on a daily basis and combine them with Liao’s homemade sauces and condiments. In addition to the popular poke bowls, the new location will feature a full kitchen. This will allow the team to expand with a new menu that will include appetizers such as wok-smoked edamame and chicken karage (Asian chicken nuggets),” according to the campaign. “Pokéology at Sawyer Yards will also incorporate Asian street food concepts that flow in from Japan, Korea, Los Angeles and New York City. Sushi donuts and sushi burritos — already West Coast phenomena — are examples of some of those new influences.” 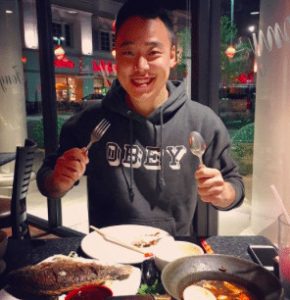 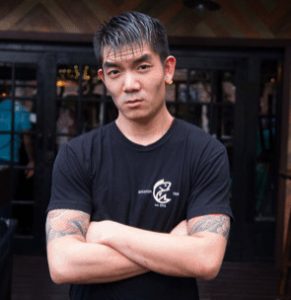 Co-Founder & Executive Pokéologist Jason Liao and Co-founder Charlie Chang are looking forward to serving lunch and dinner, providing a healthy meal choice to Houstonians. An acclaimed sushi chef, Liao made a name for himself in the sushi world at Austin’s Nanami. With over ten years of experience at various sushi venues around Texas including Umi Sushi Bar, Nanami and Aka House), Liao has built a respected track record. At Pokéology Liao will set the menu and recipes and implement an easy-to-follow daily system to be carried out by managers and employees. Chang served in the Marine Corps, completing over 400 missions during his time of duty and accruing many awards for service, planning and execution in the process. Previously with Mercedes Benz and BMW USA, he now brings his sales and marketing skills to the restaurant industry.

Bonus rewards on the campaign include complimentary bowls and apps, gifts cards, opening party invitations and year-long discounts. Proceeds will fund the new Sawyer Yards restaurant’s design, construction build-out, furniture and fixtures, equipment and supplies. The team will expand upon the concepts already in place at Rice Village. 69 days remain on the Reg C campaign. Sawyer Yards Pokéology plans to open in March 2018.