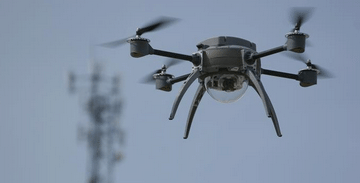 “Flock is a small, highly technical team from Cambridge University, Oxford University and Imperial College London. Flock recently closed a funding round lead by London VC Downing Ventures, alongside the London Co-Investment Fund and a syndicate of specialised angels (including big names in the automotive, Big Data, insurance and startup worlds), in addition to grants from Innovate UK and Ordnance Survey. Flock is paving the way for Big-Data driven risk intelligence and insurance for complex operations.”

According to Insurance Journal, the “Flock Cover” smartphone app notably provides on-demand insurance for commercial drone pilots in the UK, with policies starting from just £5 ($7) for up to eight hours of liability and hull cover. Flock’s CEO, Ed Leon Klinger, stated:

“Questions around the safety of drones are becoming increasingly prominent, as illustrated by the UK government’s upcoming draft Drone Bill. Flock’s first product – the Flock Cover app – not only empowers pilots to fly safer, but also rewards lower-risk flights, helping to reduce claims and make the industry safer as a whole.”

In regards to expansion and growth, Flock is reportedly working with Allianz, drone manufacturers, software companies, and training schools to debut smarter insurance policies for drones throughout Europe.