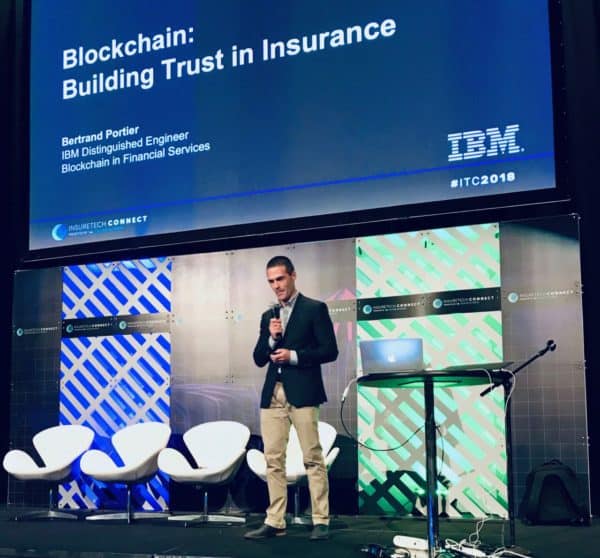 On October 2-3, 2018 Oliver Wyman, a global management consulting firm, presented Insuretech Connect at the MGM Grand in Las Vegas, Nevada. The event was promoted as the largest annual insurtech event in the world, this year boasting over 6000 registered guests and over 250 speakers. Attendees cover the gambit in the insurance industry, from large brokers to small technology focused startups.

As a chief technology officer, my focus at the event was two-fold. First of all, gathering a grasp of the overall industry technology adoption curve (“Where is the industry at now?”), and secondly, understanding what trends exist on the cutting-edge side for technology in the insurance industry.

Transition from legacy technology was an overarching theme of the event. Many of the main stage sessions expressed an excitement around sweeping innovation opportunities with an underlying awareness of the challenges felt by the larger enterprises in the space.

Namely, most of them are still dependent on legacy pieces of infrastructure that are costly to migrate away from.

Lunch conversation chatter often mentioned the slow pace in which insurance technology evolves. “Insurtech is five years behind Fintech” was a comment repeated to me by multiple people and it makes sense that an industry built on analysis of risk from every angle would be extremely cautious about change.

Two technologies filled the cutting edge discussion: AI [artificial intelligence] and blockchain, but both were met with a level of caution and skepticism.

Many benefits of AI were discussed in detail, and speakers tended to agree that AI had the power to create new and substantial efficiencies throughout the insurance space from lead filtering to underwriting. At the same time, regulation presents major challenges around using AI for insurance. 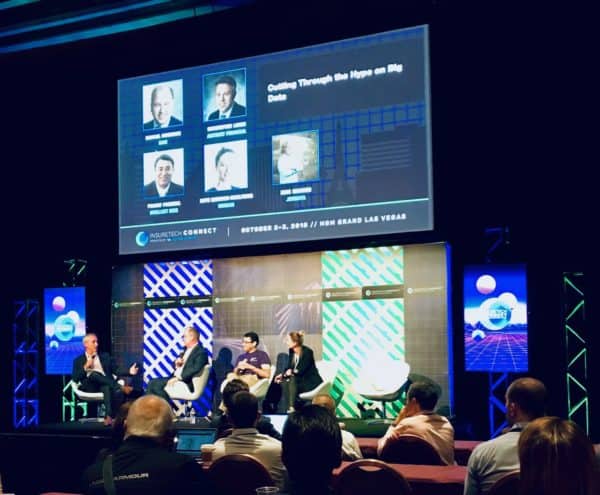 In a session titled Cutting through the Hype on Big Data, Michael Consedine, CEO of the National Association of Insurance Commissioners stated:

“Big Data usage should not be a black box. Companies must be able to explain and have mastery of the models they want to use.”

This requirement presents a particular problem for AI usage since neural nets, once trained, are generally not human readable or well understood.

Furthermore, Sofie Quidenus-Wahlforss, CEO of omni:us shared that regulation like the EU’s GDPR present a great hamstring to the development of insurance AI.

Large training sets are a key factor in developing good AI, and GDPR limits sharing of data between enterprises. She suggested that this will cause the EU to fall behind in AI compared to other areas of the world that have less restrictive data use laws. 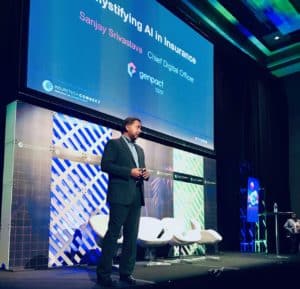 Sanjay Srivastava, Chief Digital Officer of Genpact talked about first implementations of AI from the past 3 years in his session Demystifying AI in Insurance, but attention was placed on a format more attainable for his audience, “Building AI in your company is a journey, not a destination. Focus on ‘small bites’ where you can see early wins.”

At the same time, Srivastava indicated fundamentals of insurance were still in focus:

“We believe strongly in mapping and understanding your customer’s journey.”

Of course, the question is not whether or not AI has value. It absolutely does, but the particulars of implementation matter a lot and insurance companies are in many respects right to be cautious.

In a session focused on his employer, Berkshire Hathaway Specialty Insurance, Isa Terzi, VP, Global Analytics and Reporting Lead, talked about the importance of architecting systems and practices right the first time.

“Building a company to last forever” thinking means measuring twice, and cutting once. Scott Fitzgerald, Chief Marketing Officer of Duck Creek Technologies noted that some early AI implementations were likely to become legacy systems at a record pace and companies should think very carefully about where to add value in the long term.

Blockchain discussion was equally tempered, but less mature than AI.

In a session titled Blockchain: Building Trust in Insurance, Bertrand Portier, a Distinguished Engineer at IBM laid out the basics of when a blockchain was useful in an enterprise and when it was not.

It could have easily been described as a blockchain 101 session. Examples shown were still in proof-of-concept prototype phase, like a proof-of-insurance application demonstrated by Marsh Insurance that utilized blockchain records to validate document authenticity.

Absent from the conversation were metrics like how much efficiency an enterprise can hope to gain through implementation of the blockchain technology in their business, or any guidance on how heavily companies should be investing in it.

The expo hall was a bursting wall to wall buffet for larger companies that were looking to evolve their business. Technology consulting firms like IBM and Capgemini had large footprints touting their experience with breakthrough advancements and a laundry list of partners.

A passing booth conversation again struck me on the topic of blockchain. The exhibitor said that namely blockchain was an area most insurance companies would not touch right now simply because it had unclear value and an even less defined implementation path. Blockchain at this point appears to be mostly stuck in the pilot or proof-of-concept phase.

Overall event sentiment was clear that there is still plenty of room for innovation in insurance. While some upstarts are looking to help large insurers evolve, others are finding footholds through the use of nimble data techniques to take their own piece of the insurance pie. 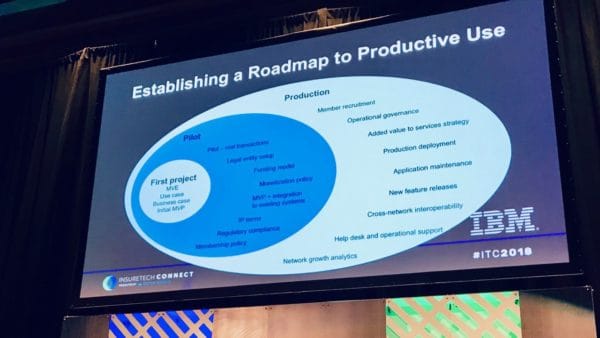 “Up to 45% of the overall insurance market is not being addressed by large insurers either because they have conditions that exclude them, insurance is too costly, or the process of purchasing insurance is just too cumbersome.”

Firms such as Mira speak to the new opportunities brought to the market by fresh eyes and freedom from legacy encumbrances.

Insurance innovation will continue to be driven by focusing on the biggest pain points in the industry, and finding solutions, with regulation awareness. This means AI and blockchain may be a tool employed, but the conversation must start with understanding the problem, not a technology solution.

Insuretech Connect gave a concise view of an evolving industry that will continue to take calculated steps forward into the future of technology. 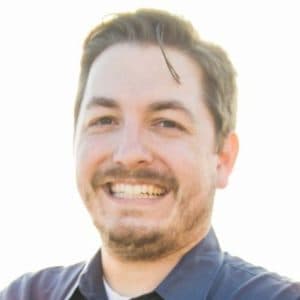 Daniel Rice is Co-Founder & CTO of Sagewise, a Legaltech startup that offers technology to efficiently resolve disputes using blockchains and cryptocurrency.  Dan is a veteran CTO of multiple Fintech companies and a Fintech & blockchain enthusiast. A YNext Incubator 2016 alumni, Dan is also the founder of the Bitcoin Developers Los Angeles & Orange County CTO Forum. His apps have been downloaded over 5 million times.