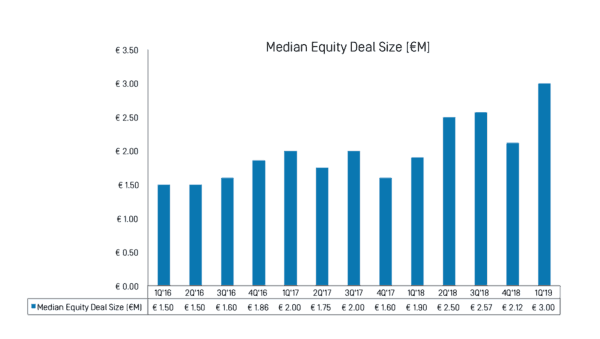 Venture capital deals in Europe during Q1 were pretty strong, according to the most recent Dow Jones Venture Capital Report.

According to the publication, VC funding “surged” in Q1 22% – the second best quarter on record.

In total, €6.79 billion was raised for 743 funding rounds. This amount is just shy of the best period during Q4 of 2015 when VC funding topped €7.06 billion. The median deal size hit €3 Million as the overall number of rounds declined. There may be a trend towards later stage deals that are deemed less risky.

The top sector for funding was the Business & Financial Services sector. Dow Jones reports that 185 rounds raised €2.55 with Fintech OakNorth Holdings, a provider of loans and banking services to SMEs, raised €384 million.

Digital challenger bank N26 was on the list having closed on a €264.35 million round in January.

Even as Brexit stress troubles the UK, the country still held onto the VC deal crown with 29% share of the funding. But even while besting its European peers, this percentage is down considerably from its 3 year average of 35%. France and Germany came in second and third place, respectively.

The report said that initial public offerings (IPOs) for venture-backed firms were in “feeble shape.”