Two men who ran a Dark Net website called NextDayGear from which they sold more than 10 000 packages of illicit drugs have been convicted in New York.

The New District Attorney’s office says the men ran their business between 2013 and 2018, during which time they transmitted packages of injectable and oral steroids, including testosterone, nandrolone, and stanozolol, as well as medications to counter the effect of steroid use, including Xanax, Valium, and Viagra, and received more than $2.8 million in cryptocurrency and Western Union payments for the drugs.

The government says the men then “laundered and converted to cash” those funds.

The convictions, in this case, are the first ever executed in New York for a case of money-laundering using cryptocurrencies.

The convictions, in this case, are the first ever executed in New York for a case of money-laundering using cryptocurrencies Click to Tweet

Two other men accused of running a drug market on the Dark Net were indicted in New York last week for allegedly selling “hundreds of thousands of counterfeit Xanax tablets and other controlled substances to buyers in 43 states, and laundering $2.3 million in cryptocurrency by using preloaded debit cards and withdrawing cash at ATMs in Manhattan and New Jersey.”

Crain and Sanchez appear to have manufactured at least some of the drugs in labs they initially set up in a series of Manhattan apartments:

“The defendants purchased steroids, precursor chemicals, and other controlled substances wholesale from China and other countries. After obtaining the chemicals and substances, they mixed, pressed, and packaged them, often under brand names they created; advertised and sold them online; and shipped them to customers in all 50 states and sixteen countries.”

They later moved their operations to Dallas, Texas, prosecutors say, where they were arrested. 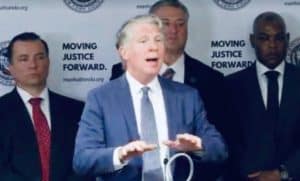 Before their arrest, the men found and serviced a substantial market of customers interested in purchasing ‘prescription free’ hormones and associated drugs:

“These defendants raked in crypto and cash worth millions on their full-service website that sold prescription-free counterfeit steroids and other controlled substances to customers in all fifty states.”

Vance, Jr warned about the extensive capacities of his own and other cooperating law enforcement agencies and agents, which in this case included the New York Rackets Bureau, computer forensics specialists, the Dallas Police, and the US Postal Service:

“Online drug sellers who do business in New York should take note: whether you’re operating in plain sight or in hidden corners of the dark web, my Office has the skills and resources to follow the money, shut down your business, and hold you accountable.”