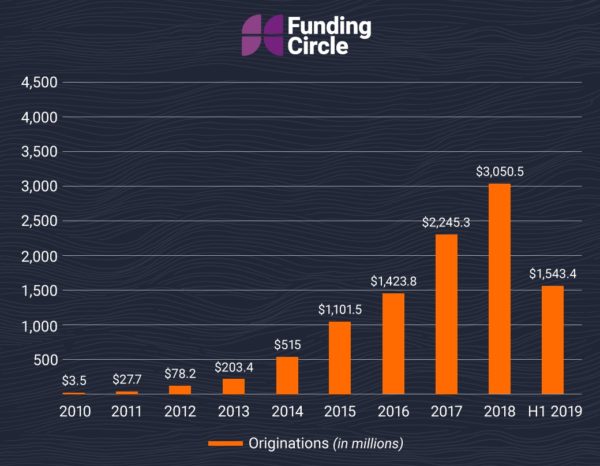 Marketplace lending company Funding Circle (LSE:FCH) is out with a release announcing the platform has now lent over $10 billion since launch in 2010. Funding Circle operates in the UK, Germany, the Netherlands and the US.

The London based company is the first peer to peer lender to go public in the UK.

Bernardo Martinez, Funding Circle US Managing Director, issued a statement on the announcement:

“We are incredibly proud that Funding Circle has become small business’ first choice for loans. We look forward to continuing to build on the strong foundations we have put in place to help many more businesses in the years ahead.”

Funding Circle notes that it has facilitated loans from over 90,000 investors to 72,000 small businesses. Funding Circle’s lending platform is the largest operating in any the geographies the company services.

Today Funding Circle reports that it manages a loan portfolio of $3 billion (£2.5 billion) in the United Kingdom and $1 billion in the United States, plus an additional $175 million (€156 million) and $129 million (€115 million) in Germany and the Netherlands, respectively.

Within the United States, Funding Circle claims that it holds more US small business loans outstanding than almost 98% of banks.

The company proudly states that in 2018 for each dollar lent to a small business $2 of GDP was generated. Funding Circle states that it contributed $8.7 billion to the global economy, and created and sustained 115,000 jobs globally.

Funding Circle recently released its Q2 results which showed an improving top-line number but a company that has yet to turn a profit. The report helped to push shares in Funding Circle higher as the company trades near a 52 week low.