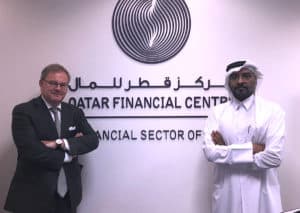 The Qatar Financial Center (QFC), one of the largest and fastest-growing business and financial centers in the Middle Eastern country, ended 2019 with a significant 33% growth, as nearly 200 companies registered on QFC’s platform. The number of firms establishing operations out of the QFC currently stands at 816. At the beginning of last year, there were only 612 firms that had registered with the organization. Now, the QFC is planning to register 1,000 companies by 2022.

The expansion of companies on the QFC platform represents several major industries and sectors, which include financial and non-financial services, such as Fintech, IT, and tax and investment consulting. The companies represent several different nations including the US, Canada, the United Kingdom, France, Germany, Switzerland, Jordan, and India.

“The QFC platform has made substantial progress towards its core mandate of attracting FDI to Qatar and promoting economic diversification, as seen by our remarkable international partnerships, global engagement and business growth over the course of the last year.”

Al Jaida also mentioned that with more than 800 firms now signed up on the platform, the QFC is pleased that its efforts have resulted in mutually beneficial working relationships with domestic and global stakeholders. He further noted that key industry players continue to “bolster investor confidence in Qatar, shaping the nation as the gateway of choice to the Middle East and beyond.”

The QFC began 2019 by announcing its 2022 strategy. The organization revealed at that time that it would be focusing on developing key industries in the nation’s economy that are on track for steady growth, such as digital, media, sports, and financial services sectors. The government in Qatar is also planning to target nearby markets in countries such as Oman, Kuwait, India, Pakistan, and Turkey.

The QFC has taken major steps to support local financial services providers and it has also expanded its financial services definition on the platform to include licensing to innovative Fintech solution providers. The QFC reportedly has an increasing number of Fintech companies registered on its platform including Instimatch, Q-Pay, and Goals 101. The QFC has also teamed up with B-Hive, an established European Fintech platform, in order to further develop and support Qatar’s evolving financial technology sector.

2019 saw the introduction of the Investment Promotion Agency of Qatar, which has been registered on the QFC platform and intends to be an authoritative and comprehensive source for investment solutions in the Middle Eastern nation by attracting foreign direct investment  (FDI).

The QFC committed to 11 different memorandum of understandings (MoUs) last year with key domestic and global stakeholders, such as a partnership with the Finance Office of the Presidency of the Republic of Turkey (CBFO), in order to work on long-term projects with the Istanbul Financial Center and the QFC. The QFC’s agreement with CBFO will allow Qatar-based financial institutions to set up operations in the İstanbul Finance Centre and enable financial institutions in Turkey to provide services via the QFC.

The QFC has organized several international roadshows in key markets such as the US, Spain, Turkey, China, Japan, Korea, and Taiwan, in order to introduce business owners to the different market opportunities in Qatar and the potential benefits of launching business operations in the country. QFC also welcomed delegations from Canada, Mexico, the US, France, Holland, Turkey, Russia, and Japan.