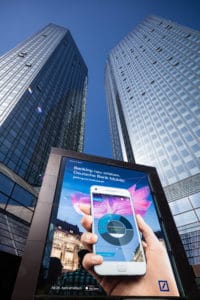 According to Reuters, sources familiar with the matter said that the three US-based tech giants had set up their operations at Deutsche Bank’s branch location in Frankfurt last week. The companies are currently drafting proposals, which will reportedly involve a three-month-long pitch and bidding process.

Deutsche Bank’s digital transformation effort, which is notably a part of the institution’s €13 billion technology upgrade plan, has come after discussions were held earlier between the bank’s CTO Berndt Leukert and technology executives at Davos and the US.

Leukert was appointed recently so that he can help create a central technology division for Deutsche Bank that will be tasked with managing the bank’s technology security, data and innovation efforts.

Deutsche’s management has, in the past, voiced concerns regarding the institution’s “lousy” and overly complex IT platforms. The new systems will be developed to simplify routine banking processes while allowing the bank to integrate the latest technologies to streamline its operations.

“To help us evaluate our options, we have started a tender process with several cloud providers … we expect to be able to complete the process in the coming months.”

Deutsche might also launch a corporate credit marketplace that the bank and the technology company would own. This marketplace would be offered to firms and other European banks as a brokerage for issuing loans.