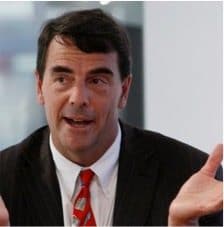 Tim Draper, a billionaire VC and crypto advocate, was interviewed on CNBC today. Draper shared that he has been out of the market for about 6 months and, alternatively, invested in crypto including Bitcoin, an asset class he views as a safe-haven of sorts. The market has gotten “frothy” according to the VC. “It is a good time to be in the private markets.”

Draper believes that no one wants to go public anymore because you have to pay $5 million or more a year to be compliant. It simply costs too much. Thus, private companies are worth more.

Draper told CNBC that we are “in for an interesting ride” alluding to geopolitical events like the Coronavirus and Socialist Bernie Sanders leading the Democrats in the primary.

“There is the fear of socialism,” Draper said. “Socialism has never worked in the history of man … I do not understand why there is this move…”

Draper also doubled down on his Bitcoin at $250,000 prediction. He sees BTC hitting that number at some point in 2022 or early 2023. Draper believes at that point in time Bitcoin will be the currency of choice.

“At some point, people are going to make that switch [to Bitcoin] and Bitcoin is going to be the big winner.”

Asked as to how much of his net worth is tied up in Bitcoin, Draper declined to say simply stating “a lot of it.”

“I think the world is going to be much better off because of this decentralized movement,” said Draper.

CNBC shared a clip of Warren Buffet stating today that “cryptocurrencies basically have no value.” Draper countered that Buffet’s holdings largely include banks and insurance companies – and thus he has a vested interest in not supporting crypto.

Draper predicted that fiat currency will become a relic of the past. Kind of like Drachmas.

You can watch the discussion below.

Why Tim Draper was out of the market for six months from CNBC.