Attorney General William P. Barr announced today the publication of the “Cryptocurrency: An Enforcement Framework.” The publication was created by Barr’s Cyber-Digital Task Force. The document outlines the Department of Justice’s approach to crypto and its challenges. The Framework states:

“… despite its relatively brief existence, this technology already plays a role in many of the most significant criminal and national security threats our nation faces. As the Task Force has found, illicit uses of cryptocurrency typically fall into three categories:

(1) financial transactions associated with the commission of crimes;

(2)money laundering and the shielding of legitimate activity from tax, reporting, or other legal requirements; or

(3) crimes, such as theft, directly implicating the cryptocurrency marketplace itself.

Task Force member John C. Demers, Assistant Attorney General for the National Security Division explained that they will adapt their strategy and tools to 21st-century financing, including to combat the use of cryptocurrencies to evade enforcement and harm our national security.

“the ongoing challenges the government faces in cryptocurrency enforcement—particularly with respect to business models (employed by certain cryptocurrency exchanges, platforms, kiosks, and casinos), and to activity (like “mixing” and “tumbling,” “chain hopping,” and certain instances of jurisdictional arbitrage) that may facilitate criminal activity.”

The Framework notes that the digital infrastructure of the blockchain “almost always transcends territorial boundaries” and some of the largest cryptoasset exchanges operate outside of the United States making enforcement challenging.

Throwing down the gauntlet, the DOJ outlines its intent:

“As this Enforcement Framework makes clear, the challenges are significant. But so, too, are the resources that the U.S. Department of Justice, as well as the U.S. government as whole, are dedicating to the effort, in collaboration with our international partners.” 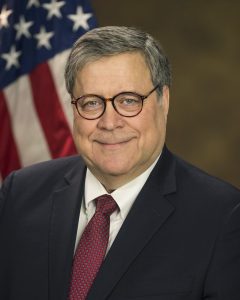 Attorney General Barr issued the following comment on the Framework:

“Cryptocurrency is a technology that could fundamentally transform how human beings interact, and how we organize society.  Ensuring that use of this technology is safe, and does not imperil our public safety or our national security, is vitally important to America and its allies. I am grateful to the Cyber-Digital Task Force for producing this detailed report, which provides a cohesive, first-of-its kind framework for those seeking to understand federal enforcement priorities in this growing space.”

“At the FBI, we see first-hand the dangers posed when criminals bend the important technological promise of cryptocurrency to illicit ends. As this Enforcement Framework describes, we see criminals using cryptocurrency to try to prevent us from ‘following the money’ across a wide range of investigations, as well as to trade in illicit goods like criminal tools on the dark web. For example, the cyber criminals behind ransomware attacks often use cryptocurrency to try to hide their true identities when acquiring malware and infrastructure, and receiving ransom payments. The men and women of the FBI are constantly innovating to keep pace with the evolution of criminals’ use of cryptocurrency.”

Task Force member Brian C. Rabbitt, the acting Assistant Attorney General for the Criminal Division, said that DLT and crypto holds tremendous promise for the future but it is important that these innovations follow the law:

“While the Department of Justice and its partners are committed to supporting the advancement of legitimate cryptocurrency technologies and uses, we will not hesitate to enforce the laws that govern these technologies when necessary to protect the public.”

The Framework reflects the Department’s extensive cooperation with domestic and international partners in ensuring they address these challenges, “to the benefit of lawful cryptocurrency users and the public at large,” said Task Force member Beth A. Williams, who serves as Assistant Attorney General for the Office of Legal Policy

The Cryptocurrency Enforcement Framework is the second report issued by the Attorney General’s Cyber-Digital Task Force, which was established in February 2018. 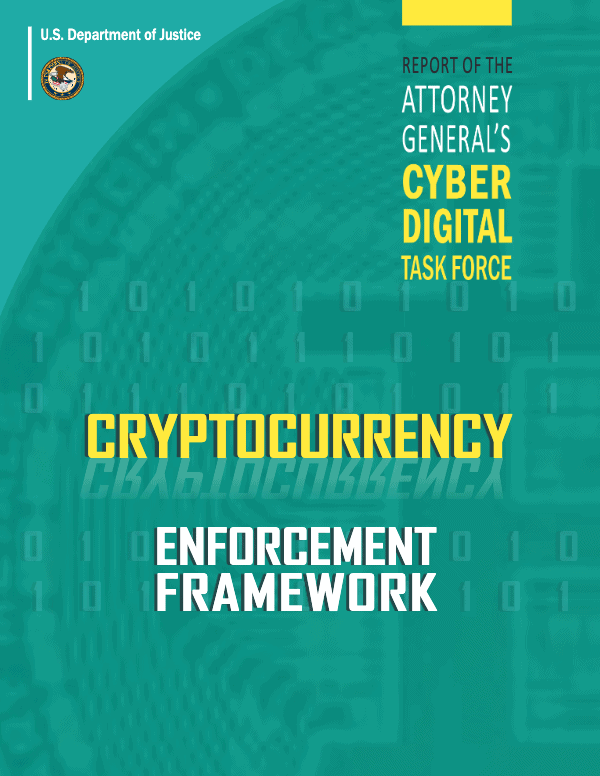