Paxos to Apply for Formal Clearing Agency License from the SEC

Paxos Trust Company, a compliant blockchain infrastructure provider, has completed a same-day settlement of US-listed equity trades in partnership with Instinet and Credit Suisse. Same-day settlement is colloquially known as T+0 – currently, financial services firms are required to settle trades on a T+2 cycle. Paxos said the project demonstrated its ability to enable same-day settlement for trades conducted throughout the day. In the current system, settlement can only occur the same day if trades are completed before 11 AM ET and therefore is rarely utilized.

Paxos Settlement Service is a permissioned blockchain solution designed to allow two parties to bilaterally settle securities trades directly with each other. The platform is said to be interoperable with the legacy clearing system and can facilitate settlement on any time cycle. The Paxos service is also said to be the first live application of blockchain technology for the US equities market and enables the simultaneous exchange of cash and securities to settle trades. Paxos Settlement Service has been settling trades daily for more than a year, and is operating on the standard T+2 settlement timeframe.

Paxos notes that it is operating under No-Action Relief from the Securities and Exchange Commission (SEC). Paxos says it will apply for full clearing agency registration with the SEC, and hopes to secure registration at some point in 2021. 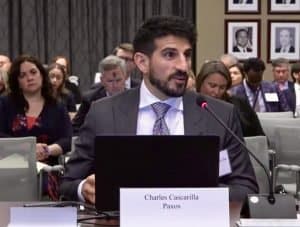 Charles Cascarilla, CEO and co-founder of Paxos, explained that settlement in US equities is opaque and laden with unnecessary delays, costs, and expenses:

“We are working hard to improve settlement for the benefit of all market participants. An upgraded settlement system can create safer, fairer and more open capital markets that foster innovation. Modern technology makes the risks of the current system obsolete while also enabling greater trading liquidity with greater ownership transparency. Paxos has built the only alternative solution that significantly alleviates risk and offers immediate benefits for market participants.”

Emmanuel Aidoo, Head of Digital Assets Markets at Credit Suisse, said that Innovation in blockchain technology is incremental and they are excited to make progress in the path to faster settlement times at lower costs in public equities.

“These advancements will ultimately benefit the broader market as more firms join the platform. We’re pleased to work with Paxos and Instinet to advance this technology, which will help unlock capital, increase liquidity and reduce risk over time.”

Luke Mauro, Global Head of Operations at Instinet Holdings Incorporated, said it was natural for Instinet to be an active participant in the digital evolution of the settlement space.

“We’re excited to stress test same-day cycles on Paxos, because our long-term goal is to always offer our clients more choices, advanced technologies, and greater efficiencies in both their settlement processes as well as time horizons. This event was another strong proof point for Paxos’s effective application of blockchain.”

If approved by the SEC, Paxos says it plans to provide the industry with greater flexibility around their settlement cycles, ranging from T+2 to T+0. Paxos will also run multilateral netting processes in real-time.

Cascarilla added that they will introduce significant financial benefits and achieve operational efficiencies with blockchain technology that will facilitate an open financial system.

“With Paxos, all market participants stand to benefit from improved settlement.”