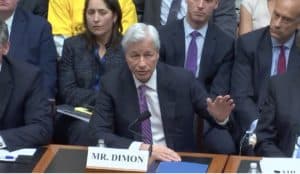 Once again, Jamie Dimon, CEO of JP Morgan, is in the news again hating on crypto – this time Bitcoin specifically.

Recently, Bitcoin has been on the rise again due in part to an expectation of persistent (not transitory) inflation. Many Bitcoin supporters believe that Bitcoin is a great hedge against rising prices – more of a digital gold-like asset – minus physical qualities.

According to CNBC, Dimon stated, “I personally think that Bitcoin is worthless.” Dimon’s comments were delivered during a gathering at the Institute of International Finance.

Dimon added that his opinion is not necessarily shared by JPM’s client as there is demand for cypto and JPM is providing it.

Bitcoin is the world’s most popular cryptocurrency with a current market cap of over $1 trillion and a per Bitcoin price of over $57,0000 – near its all-time high of around $60,000. Unlike some other cryptocurrencies, the number of Bitcoins that will eventually be in circulation is capped. That, and the relatively easy (if slow) transferability has made BTC a popular asset. Even more so in countries where inflation is rampant.

Meanwhile, the US has embarked on a spending splurge and is currently attempting to pass a $3.5 trillion infrastructure bill that has little to do with infrastructure. This, along with other policies, may erode the value of the US dollar over time.