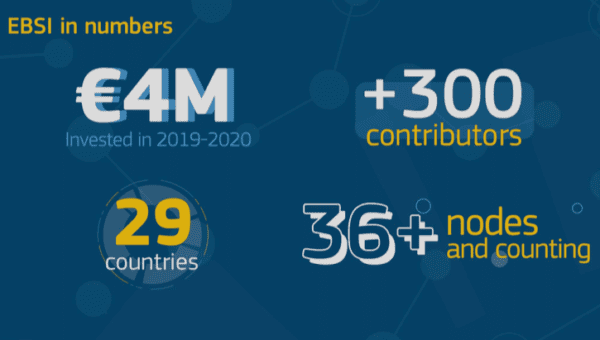 The EBSI has been in the works for several years now as the EU aims to leverage blockchain technology to improve or add digital services to benefit the population of Europe. Since 2020, EBSI is deploying a network of distributed blockchain nodes across Europe, supporting applications focused on selected use-cases.

Since 2020, EBSI has been deploying a network of distributed blockchain nodes across Europe, supporting applications focused on selected use-cases.

Phase one (solution design) was launched in July 2021 for a duration of 3 months.

Phase two (prototype development and lab testing) launched last month (December 2021) and is for a duration of 6 months.

The phase 2A of prototype development and lab testing has been awarded to the following 5 contractors:

Each of these blockchain providers participated in the Phase one round.

“This opportunity aligns with the vision we had from Billon’s founding, to focus the power of blockchain on solutions that transform existing ways that institutions, companies, and individuals do business. We see this as a game-changing contract, allowing us to demonstrate technology that complies with EU regulations, and makes scalable blockchain-based public services a reality.”

Robert Kałuża, another Billon co-founder added that Billon shares the EU vision for the future of blockchain.

“The next generation of blockchain technology must be public and private collaborations so that innovation is immediately deployable. We could not be more pleased to focus efforts on solving problems in intellectual property and product life cycle management.”

In a blog post, IOTO issued the following statement following its selection:

“The IOTA Foundation is excited to work with the European Commission on the EU blockchain pre-commercial procurement over the next six months, as well as with our subcontracted partner Software AG and other industry partners on use cases. We very much support the strategic focus placed by the European Commission on blockchain and distributed ledger technology as a driver for innovation and growth. We are privileged to be part of this pre-commercial procurement procedure to develop a Europe-wide infrastructure based on blockchain and DLT for use in public services, and excited to be moving ahead in Phase 2.”

At the end of Phase 2A, a minimum of three projects are expected to be chosen for Phase 2B, the final stage of the pre-procurement period, where the capabilities of the newly developed infrastructure and applications will be field-tested.

EBSI will be built as a “public permissioned” blockchain. Nodes will be managed by the European Commission, Member States, or participating countries and publicly accessible. EBSI is said to have 36+ live nodes.